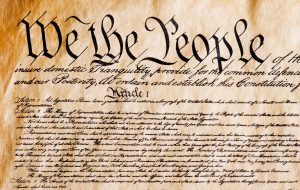 On Feb. 9, 2021, the trial of former President Donald Trump began. The current political party of Donald Trump has continued to argue that the trial should not happen because the defendant is no longer president of the United States and therefore by Article I, Section 4 of the Constitution, the senate has no authority to try him. I will argue that it is indeed constitutional. I will not discuss the merits of Mr. Trump’s culpability or criminality. Nor will I speculate on whether this trial to convict Trump on one article of impeachment by the House of Representatives is a good idea for the wellness of this country.

The section of the Constitution that came into play this week was Article I , Section 4, which reads:
“The Senate shall have the sole Power to try all Impeachments. When sitting for that Purpose, they shall be on Oath or Affirmation. When the President of the United States is tried, the Chief Justice shall preside: And no Person shall be convicted without the Concurrence of two thirds of the Members present.”

Judgment in Cases of Impeachment shall not extend further than to removal from Office, and disqualification to hold and enjoy any Office of honor, Trust or Profit under the United States: but the Party convicted shall nevertheless be liable and subject to Indictment, Trial, Judgment and Punishment, according to Law.”
Just to get our terminology and timeline straight, the impeachment of the former president occurred while he was still in office. Impeachment is like a grand jury trial where there is a vote to determine if there is enough evidence for a conviction. What just happened is the actual trial.
Chief Justice of the Supreme Court John G. Roberts –appointed by George W. Bush– has excused himself from presiding over this trial. For those keeping track, Justice Roberts presided over the last impeachment trial that took place in early 2020. Some have argued that the trial was unconstitutional because Roberts was not presiding over it. The Constitution, however, clearly and unambiguously states that the Chief Justice will preside whenever the president is tried. Donald Trump is no longer President, therefore the Chief Justice is not bound to preside. While this sort of point is trivial, we can expect this argument to enjoy some runtime on television with the likes of evening pundits shows from the opinion section Fox News or the late night comedians.
The real issue is whether you can have a trial of a president who is no longer in office. Donald Trump’s lawyers predictably and unbashfully argued that it would be similar to a case where a man is on trial for murder except the man accused is no longer living. How can you sentence a man to punishment if he is not around to serve it? Ergo how can you remove a person from office who is no longer in office?
The counter argument is that there are two punishments stated in the Constitution that if convicted, that person shall be removed from office and can not ever hold office (again) or profit from the United States.
Rhetorical Rand Paul puts forth that both punishments have to be enforceable at the same time for there to be cause for a trial in the senate. It’s like saying a student must be under eighteen and live in a school district to attend public school in that district. If one of those isn’t true, then that student cannot attend school in that school district.
However, in a piece in the Wall Street Journal, Chuck Cooper, who is as conservative they get, posits that this is wrong and a misreading of the law. The removal of the president is akin to a mandatory minimum in a criminal case. Paul and many Republicans read Article I, Section 4 of the constitution as a logical conjunction. However, what the text is doing is setting a limit. A conviction can only remove the president from office and deprive the defendant from holding office and or profiting from the United States. Moreover, it is typical of the Constitution to limit power instead of giving rights. For example, the constitution doesn’t really give you the freedom of speech. Instead it simply limits the power of government to impose restrictions. Most of what we have around the idea of freedom of speech comes from years of case law. People like Ted Cruz (magna cum laude, Harvard Law ‘95) who has been employed by the same law firm as Mr. Cooper should, in theory, know this.
Not many people have been impeached, so there isn’t a lot of precedent around this particular issue. However, it does make sense that there would be consequences for people in office,  even the president. If not, it would just leave open the possibility of a president committing any number of crimes just so long as that person is no longer in office at the time of an impeachment trial. As one of the founding fathers John Quincy Adams put it, “I hold myself, so long as I have the breath of life in my body, amenable to impeachment by this House for everything I did during the time I held any public office.”