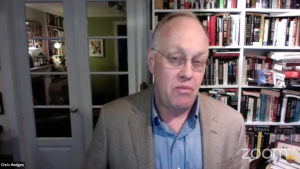 On Mar. 12, Brooklyn College’s Undergraduate Student Government hosted a conversation with Chris Hedges, a Pulitzer Prize-winning journalist and bestselling author, best known for checking politicians from both sides of the aisle. The discussion covered former President Donald Trump’s administration and the future of the United States.

Hedges started with the “excess of democracy” that dates back to 1971, when movements centered around women’s rights, anti-war sentiments, environmental concerns, and others grew in popularity. For fear of losing their power, frightened business elites mounted a campaign to roll back and shut down the programs that addressed social inequality. The campaign was extremely successful.

These actions against the working class, Hedges argues, led to Trump’s rise decades later. “The rise of Trump was tied directly to Obama’s very flagrant betrayal of the working class, and the mandate, in which he had been given to confront the elites and his refusal, of course, to do so,” he said.

Hedges calls Trump “clearly a con artist, vulgar, crude, inept, a narcissist,” and claims he came into power because of the pain caused to the working class. He also adds that Trump is the worst US president, “I never thought after George W. Bush we could get worse than that, but he is certainly the worst president in the American history.”

Because of how deeply betrayed the working class felt, and how strong the anger towards the Democratic Party rose, old UAW workers voted for Bernie Sanders in the primary, but for Trump in the general election.

Hedges believes that the 2016 election showed what really is happening in the country. The ruling elite doesn’t have as much power as they had before, and they will keep losing this power.

With Trump’s administration out of office, and Joe Biden being our new president, participants asked Hedges whether he saw the next four years as a better opportunity for political and economic change over Donald Trump. In response, Hedges said no, comparing Biden’s administration with the 1932 ruling of France von Poppin in Germany. Hedges states that Biden was chosen by the ruling elite, who knew he wouldn’t challenge their power, with Obama ensuring that Biden was elected.

“My fear with the Biden administration is that the refusal on their part to address the social inequality almost guarantees the rise of probably a competent fascist,” said Hedges.

During the conversation, Hedges discussed the $1.9 trillion COVID-19 relief package recently passed by President Biden. What this act does is “it offers a kind of momentary respite from the country’s death spiral,” he said. The main question is what will happen to all those people who get this support? What will they do when the money stops arriving? Hedges opined that he doesn’t think there is a chance the federal government will orchestrate another massive relief package.

Hedges believes that many are naive to think that Trump and his followers are merely an anomaly in American politics. “They [The Ruling Elites] think they can make Trump and his supporters disappear by banishing them from social media and recreate the asean regime,” he said, using the Jan. 6 riots as proof that this isn’t going away as easily as many may have hoped.  “The Trump era, if not Trump himself, is the future and the ruling elites embodied by Biden and the Democratic Party as well as the kind of polite wing of the Republican Party is headed for the dustbin of history.”