Passions raged as CUNY funding and tuition were the targets of a rally and subsequent state Senate committee hearing on higher education on Thursday Oct. 23.

Around 50 protesters rallied outside of the main gate of the East Quad at Brooklyn College, chanting, “Hey hey, ho ho, tuition hikes have got to go,” and “faculty, students, and staff unite. Same struggle, same fight.”

The protest was organized by the CUNY Rising Alliance, an activist group dedicated to working towards what they call a “free and quality CUNY.”

Jamell Henderson, a coordinator at the CUNY Rising Alliance and a former adjunct professor and graduate of Brooklyn College, delivered a fiery speech to the assembled students, professors, and media who gathered there. 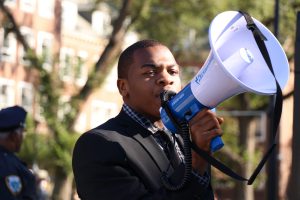 “We are here to no longer ask because asking got us nowhere,” Henderson said. “If you don’t listen, we’ll make sure you hear us loud and clear. Governor Cuomo: you messed with the wrong crowd.”

“We are not funding public higher education,” said Timothy Hunter, the student government association president at the City College of Technology and new Chair of the Undergraduate Student Senate (USS). “ We are not a top priority for New York legislators in New York State. We need to make sure we are coming ready to fight for higher education,” he said. Later, Hunter held up a twitter handle for State Senator Toby Ann Stavisky, and encouraged protesters to tweet images of the crowd to her.

Among the issues mentioned were food insecurity among students. “New York City does not have to be synonymous with struggle,” said Santana Alvarado, a Hunter College student and chairperson of NYPIRG. “Too many students are homeless.”

Keith Redzinak, a political science major at Brooklyn College, said that it was “impossible” to pay your own way through college. “Up until 1979, CUNY used to be free,” Redzinak said. “Since then tuition has been going up every single year. So what we’re trying to do is fight tuition hikes and make CUNY free again because it’s getting a little ridiculous.”

At the hearing of the Committee on Education later that day, state legislators heard testimony from students, professors, and college presidents at the Brooklyn College Student Union Building. The meeting was interrupted by applause and cheering as those who rallied outside of the East Quad gate joined the hearing. 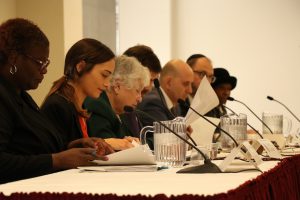 Also testifying was Leonard Blades, Vice Chair of Disability Affairs at USS, who thanked some of the senators for their work on disability.

Senator Robert Jackson applauded those testifying. “It was very important to hear from the students themselves and the activists themselves it is totally different from the President and CUNY and the administrative point of view,” he said. “Some of them cannot really say what they really want to say.”

Henderson gave the most powerful testimony of the day, decrying the poor heating and air conditioning at Brooklyn College, particularly Roosevelt Hall where he taught as an adjunct, and told the legislators about the state of CUNY’s budget. “It is appalling that in 2019 we are asking the state to fully fund CUNY. It doesn’t make any sense,” he said. “The governor blatantly lied when he said that students making under $25,000 a year can go to school for free, referring primarily to the Excelsior Scholarship which was implemented in 2017. A common criticism of the program, which was reiterated in the hearing multiple times, is that the hidden costs of college which include transportation, books, and food among other things, wasn’t accounted for when the Excelsior Scholarship was implemented and, therefore, many poorer students can’t take advantage of it.

“We sit here and leaders say to us as young people education is the key to success. Well, stop giving us a rusted damn key,” Henderson said, slamming his fist on the table of the hearing room to uproarious applause.

Kevin Limiti is the News Editor for the Brooklyn College Vanguard. He is a reporter and photographer with credits in the Brooklyn Eagle, NY1, Occupy.com, Able News, and other outlets. He enjoys writing novels and playing guitar in his spare time.
View all posts by Kevin Limiti →
← Newer Post
Rain Won’t Stop USG Fall Fest
Older Post →
Men and Women Make Soccer Playoffs