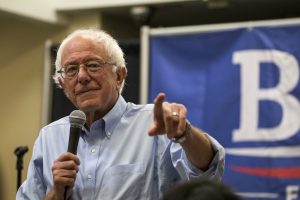 He’s the Brooklyn College alumnus on everyone’s lips. The cable news pundits, the network jokesters, the rose-emoji Twittersphere – everyone is coalescing around the loudmouthed Brooklyn Jew who tells it like it is. Love him or hate him, he’s the biggest name in American politics right now, and he’s not going away any time soon.

But enough about Alan Dershowitz. As of press time, Vermont Senator (and onetime BC attendee) Bernie Sanders has either won or almost won the contentious Iowa caucus, and he’s poised to totally sweep New Hampshire’s presidential primaries. It’s the closest BC has ever gotten to the presidency at least since Shirley Chisholm’s 1972 run – possibly since 1996, if you count Bob Dole’s unsuccessful attempt to unseat Bill Clinton. (Dole took engineering classes at BC in the ‘40s while serving in the military during World War II.)

I don’t have hard data on how popular Bernie Sanders is among BC students now; I don’t have hard data on how popular he was here back in 2016 either, unless you count an Excelsior “poll” which had a sample size of twelve. But anecdotally, based on all the conversations I’ve had, all the Sanders-branded stickers/buttons/thermoses/onesies I’ve eyed, and all the life-sized cardboard cutouts of Sanders I’ve brushed past on Bedford Ave, I’d say Bernie Sanders is hands-down the most popular thing on campus. Maybe he’d have some competition if Cardi B strode along the East Quad on a unicorn while handing out Juul pods, but until then, BC will remain firmly under the thrall of Berniemania.

But while Brooklyn College students have gleefully embraced the self-styled democratic socialist, Br  ooklyn College itself has been hesitant to truly acknowledge its most famous student. Oh, sure, they let Bernie come to campus twice in 2016, and kick off his 2020 campaign on the East Quad last year. At least one student activist I know has told me they came to Brooklyn College in no small part because of Bernie Sanders; I suspect the actual number of students who were attracted to BC in some small part because of Sanders is in the hundreds, maybe even the thousands. Certainly, BC was aware of his power over the 18-29 demographic when they invited him to be the graduation speaker in 2017 – at this time three years ago, every wall was plastered with the image of Sanders’ hair and glasses.

And yet, while Sanders is extremely popular with BC students now, the students he went to school with in 1960 mostly despise him. About once a semester, I get a cranky e-mail from some boomer or another, writing to inform me about how the kids these days are too far left, or how climate change is a hoax, or about (oh god) the “gay agenda.” I don’t want to imply that the average BC graduate of the ‘60s is a raving right-wing loonie, but they certainly skew towards the conservative side; and without the financial support Albany is supposed to be giving CUNY, they’re Brooklyn College’s main source of cash flow.

This puts BC’s publicity team in a bit of a bind: support Sanders and risk alienating donors, or ignore Sanders and lose out on an excited student body? Or try to eke out a middle ground between the two positions, and see how close you can fly to the sun?

Brooklyn College would be foolish to not bask in the glow of Sanders’ flame, but as we all know, when you play with fire, you run the risk of getting berned.