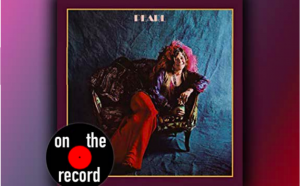 When I was growing up, my parents had The Buffalo News delivered to my house every single morning. It would arrive before dawn, and my dad would typically be the first to sit down and read along with a cup of coffee. My mother usually wouldn’t get around to it until she came home from work in the evenings, where she would stand at the kitchen counter flipping the pages. Once a week, the hefty Sunday edition of the paper would bring us together in the living room. My sister and I favored the Sunday comics, while my parents skimmed the local news. And then, somewhere along the way, I discovered the arts section.

The music critic at The Buffalo News has been the same guy for some twenty years now. I read his concert reviews, his takes on the Grammys, his thoughts on the local music scene, and just about everything in between. I thought he was grounded and smart, he wasn’t haughty or snobbish about his taste, and for some reason I imagined him sequestered away in a dark corner of the newsroom office — private and lonesome.

As it turns out, Jeff Miers is the exact opposite of this. It wasn’t until a few years later that I met his son, a ridiculously talented bassist, and then Jeff at some point, and I learned that the latter was one of the most easy going people I’ve ever met. He’s well known in the community, but he’s one of the guys. His overarching message has always been the same: music can, will, and should be a unifying force in the world. I believed that then, and I still do now.

I spent my high school years reading Jeff’s work and I was fortunate enough to have him take an interest in mine. I interned at a local Buffalo magazine and sat a desk ahead of his whip-smart wife, ran into him from time to time at different gigs, and I still regularly hear from him on Twitter. We commiserate over some topics (Taylor Swift!) and rejoice over others (Grateful Dead reissues!), and he is one of the original people I can thank for encouraging me to stay in this business — this business that isn’t typically as kind to female music journalists as it is to male ones.

The majority of the music writing I read up until relatively recently was written by men. A lot of it was extremely good writing, a lot of it helped shape the way I wrote my own work, and I got a lot of wonderful pieces of advice from said men. But it wasn’t until the last few years that I found women music writers (Jessica Hopper, Laura Snapes, etc.) to read and, ultimately, look up to. For several years, I was determined to keep my journalism and my music separate. One was work and the other was my hobby, and the world of journalism was already hard enough to break into without adding another level of specificity to it. It wasn’t until I saw other women at the forefront of the industry that I thought maybe I could head in the same direction.

And this is the way a lot of young women have felt about Elizabeth Warren, whose recent decision to end her presidential campaign has left many of us feeling…deflated. Warren, it appeared, was the package deal — intelligent, seasoned, level headed, and more than capable of handling the job. Yet, as most women unfortunately know, you can have it all and still not be good enough, and as they also know, you will almost always have to work doubly hard and doubly fast at the same tasks as your male counterparts to receive the exact same credit and recognition. The scales have always been tilted, we’ve just learned to play the game that way.

But it is still head-spinning to watch a woman tick all the boxes and be denied an opportunity that she would clearly excel at. It’s like showing up for a job interview, perfectly qualified for the position, and being told you’re not quite what they’re looking for. What is it then that you’re looking for? In politics, music, film, sports, medicine, and nearly every single professional field imaginable, the situation is the same. Ironically, when it comes to where to exist, misogyny doesn’t discriminate.

In my frustration, I turned to Janis Joplin, and spun her second and final album, Pearl. Released posthumously in 1971, it featured the massive hit, “Me and Bobby McGee.” Joplin has always scared the hell out of me in a sort of kick-your-ass kind of way, but there’s no denying that her vocals are pure, unadulterated, straight-up rock ‘n’ roll.

“All you ever gotta do is be a good man one time to one woman,” she belts on “Cry Baby,” “and that’ll be the end of the road, babe.”

Maybe it’s true that all it would take is one significant step in the right direction to change the trajectory of the entire story, or maybe it would change the minds of hundreds more people.

My favorite track is the simplest: “Mercedes Benz,” which Joplin sings with nothing but a click track behind her, only it’s not really a click track but rather someone keeping time by patting their thigh.

“I’d like to do a song of great social and political import,” she introduces the track. She asks the Lord to help her acquire some things — a color TV, a night on the town — but it would seem to me that if you asked, she might tell you that she’s more than capable of getting those things herself.

Like so many other trailblazing women — and like Warren — Joplin was often deemed “too much” or “too bold,” but in reality, she was probably exactly what we needed at the time. It’s a shame their lights got snuffed out before they had a chance to burn even brighter.