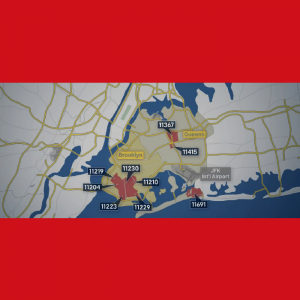 The zip code where Brooklyn College resides is one of nine zip codes in Brooklyn and Queens seeing closures as COVID-19 positivity rates rise above three percent for over seven consecutive days.

Brooklyn College, located in zip code 11210, has garnered a 6.14 percent positivity rate. To control the spread of the virus within these areas, public officials plan to “rewind” some aspects of reopening.

“We’ve learned over and over from this disease that it is important to act aggressively, and when the data tells us it’s time for even the toughest and most rigorous actions, we follow the data, we follow the science,” said NYC Mayor Bill de Blasio in a briefing on Sunday, Oct. 04.

Six Brooklyn neighborhoods are within the nine zip codes, including Borough Park, Midwood, Gravesend, Bensonhurst, and Sheepshead Bay. Another 12 zip codes are on the city’s watchlist as their COVID cases have rapidly increased, but have not yet reached above three percent for seven consecutive days. Brooklyn College is near some of these 21 hard-hit areas, including Midwood and Kensington, with positivity rates at 7.28 and 3.02 percent respectively.

De Blasio initially planned to reinstate severe restrictions within the nine hotspot zip codes by Wednesday, Oct. 6 — calling for the closure of all schools, nonessential businesses, and restaurants — but, under the review of Governor Andrew Cuomo, the rollback of lockdown has been modified. Per the state’s request, the school closure timeline moved one day earlier than the mayor proposed. The immediate shutdown of nonessential businesses was rejected by Cuomo, who stated that further revisions must be made. According to the Daily News, he assigned the state to oversee the enforcement of mask-wearing and social distancing in these zip codes.

“Too many local governments are not doing enforcement,” Cuomo said in a briefing on Monday, Oct. 5. Under Cuomo’s guidance, the city will also hold accountable religious institutions that do not comply with COVID-19 precautions.

Though the spikes in COVID-19 cases remain lower than the pandemic’s peak, when the percent of NYC residents who tested positive was 71.25, the clusters remain a concern for many. Both Cuomo and de Blasio have not stated that these figures bode a second-wave, but they will determine what measures are implemented across the hardest hit zip codes in the coming weeks.

As for how this affects Brooklyn College, the administration makes it clear that the current rise in cases does little to affect whether or not campus will open for the winter or spring sessions, and ultimately the decision to reopen comes from higher powers.

“The College’s administration is following the news closely, and any decisions moving forward will be based on the latest NY State, CUNY and local public health guidance. While the timeline ultimately comes from those entities, the Reentry Committee will work to ensure the campus is as safe as possible for students, faculty, and staff,” said Carrie Sadovnik, Director of Environmental Health and Safety, and head of BC’s Reentry Task Force.