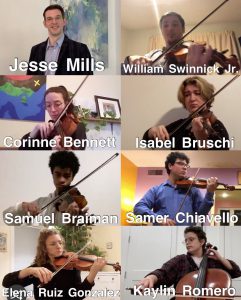 The Performers of Music for Strings../ Photo edited by
John Schilling

Jesse Mills, a violin professor and the head of the Strings Department at Brooklyn College, served as the concert’s coordinator and expressed excitement over music’s return to the community.

“Our strings students are doing a wonderful job making great progress this semester,” Mills said. “You will hear that in all of these performances.”

The concert began with William Swinnick Jr.’s violin performance of Johannes Brahms’ scherzo from the “F-A-E” Sonata, a four movement piece with a piano accompaniment provided by Eri Kang, the Conservatory’s staff accompanist.

Throughout the piece, Swinnick utilized constant shifts in dynamics to create an emphasis on specific moments. This often involved the repetition of notes at different paces and volumes that established a triumphant theme and took on an echo-like approach within the piece.

Similarly, the piano served as the backbone to Swinnick’s shifts, providing a steadiness which helped maintain the upbeat sound when played at a faster pace and conjured a melancholic aura when slowed.

As the piece continued, both Swinnick and Kang achieved a moderate tone and pace that allowed for a satisfying conclusion.

This shifted into the concert’s next performer, Corinne Bennett, a violinist who took a different approach with Krzysztof Penderecki’s Cadenza for solo violin.

Before playing, Bennett directly addressed the viewers at home to share some insight about the piece.

“This piece…is split into three sections following a slow-fast-slow pattern,” Bennett said. “One thing I love about this piece is how the sections flow into one another seamlessly and without pause.”

The aforementioned transition, however, was an early struggle for Bennett, who grew frustrated and did not understand how the sections of the piece related to one another, but she soon had an epiphany.

“As I continued working on the piece, I found the experience of playing Cadenza to be similar to  that of an inner monologue,” Bennett said. “I encourage you…to consider what inner landscape Penderecki may have had in mind when he composed Cadenza.”

With a straight face throughout, Bennett embraced Penderecki’s pattern and created a sense of tension as the piece sped up. When it finally slowed back down, Bennett let out a series of exhales that helped encapsulate the diffusion of this tension.

This did not stop Bennett’s careful finger technique, which along with her constant bodily movements throughout the piece, contributed to an abrupt ending: the piece’s softest note yet, which contrasted heavily from the screech-like sounds utilized in the piece’s loudest moments.

Playing in E major, Bruschi started the piece off with a sweet melody of moderate speed and dynamics. This, however, shifted into spaces which allowed Kang’s piano accompaniment to shine and become the driving force of the piece.

As the piano both sped up and slowed down, Bruschi’s violin melody followed, allowing for frequent tone changes. The most notable of these arrived towards the end, as the piece came to a crawl and took on a gloomier sound. Just when you think the piece is about to enter another movement, the gloom persists and the violin reaches a soft yet steady conclusion.

This allowed for Samuel Braiman, the next performer, to pick up the pace with Johann Sebastian Bach’s Partita No. 3, which includes Preludio and Gavotte en Rondeau.

Braiman began Preludio with a speedy, consistent technique in E major that created a choppy yet upbeat tone, providing a tension similar to that of Bennett’s performance. With seamless finger movement and an unbothered countenance, Braiman maintained this theme for the piece’s length before quickly transitioning to Gavotte en Rondeau.

Unlike any of the other pieces, Gavotte en Rondeau embraced what sounded like a consecutive counting of notes which allowed Braiman to utilize repetition to create a theme with a moderately high pitch throughout.

Samer Chiavello, the concert’s next violinist, took a similar approach with Eugène Ysaÿe’s Sonata No. 2, Op. 27, no. 2. In the middle of his living room, Chiavello utilized a variety of tempos throughout the piece, which came off as experimental. This included chromatic structures that use semitones either above or below the pitches close to them.

This becomes clear with Chiavello’s shifting dynamics that progressively get louder or gradually go lower, and this inconsistency was ironically consistent throughout the piece.

The real irony came, however, when Elena Ruiz Gonzalez performed Maurice Ravel’s Allegretto from Violin Sonata No. 2 in which the violin and the piano are seemingly juxtaposed.

As Kang starts on the piano, Ruiz Gonzalez plays the violin so faintly that the sound is almost drowned out entirely. The violin soon takes off, however, with forte dynamics to avoid remaining subtle. With careful precision, the violin takes over the piece as the piano goes softer, and this allows Ruiz Gonzalez to shine.

Unlike the beginning, Ruiz Gonzalez and Kang work together by the piece’s end with piano dynamics that bring the piece to a resolution and allow it to end on a high note but with a low note.

Perhaps, the most unique performance, however, came from Kaylin Romero, a cellist who ended the concert with Joseph Haydn’s Allegro moderato from Cello Concerto No. 2, op. 101.

Accompanied by Kang, Romero makes a strong entrance on the cello with a sound that transcends the screen, and these sudden notes can be felt in your stomach as if the concert was held in person.

Despite this effort, Romero plays the piece in an effortless, soothing fashion. This does not stop  Romero, however, from establishing a musical development in the midst of the piece, shaping a theme born from the opening notes. This is recapitulated soon after, however, as the piece returns to its original theme: a sonata form that brings the section to a steady conclusion.

With that, the concert came to a close, and although there was no audience to applaud, the implication was still obvious: Music had returned to BC.