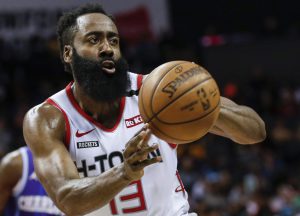 The Houston Rockets have been one of the best teams in the NBA since acquiring James Harden from the Oklahoma City Thunder before the 2012-2013 season. They have not missed the playoff with Harden on their roster, but it appears Harden’s time may be over in Houston.

With two of the leading voices in the organization being replaced, Harden and All-Star teammate and friend Russell Westbrook have expressed concerns about the organization’s direction, reported by ESPN. This sparked all types of trade rumors for the two former MVPs, with New York teams at the front of the pack.

The trade would most likely have to include young talents like Caris LeVert and Jarrett Allen and the Nets 19th pick in the draft. This would reunite Harden with former Thunder teammate Kevin Durant and pair him up in the backcourt with Kyrie Irving. These three players are some of the most skilled offensive players in the league, and the possibility of them playing together is massively intriguing. That offense could put up close to 140 points a game.

However, Harden and Irving are not known for their ball movement and willingness to be a second option. Irving struggled with it under LeBron James, causing him to request a trade from Cleveland, and Harden had trouble dealing with Chris Paul and even Westbrook taking shots from him. Even though we know Durant can take a step back like he did for the Golden State Warriors, he has his own personality with his clashes on social media. On paper, this could be the best offense the league has ever seen, but in reality, the consistent ISO ball and egos might get in the way.

Westbrook’s name has been linked very heavily to the New York Knicks. While Knicks fans might be happy that an All-Star will finally be on the team again, Westbrook might not be the one they want. The Knicks right now are trying to rebuild with a team of young talented players and hope that those talented players turn into All-Stars someday. The Knicks would need to give up those young talented players and probably a pick to get Westbrook. This could change the Knicks’ future as Westbrook has a massive contract and a playstyle that does not work with other stars or players. This would probably lower the chances of the Knicks getting a top-level free agent until Westbrook is gone. Westbrook also would not make the Knicks a playoff team, as they don’t have a roster built around his specific need of spacing because of his lack of perimeter shooting.

Both Harden and Westbrook are stars and might come to the Nets and Knicks, respectively, and could improve those teams once they arrive. However, the fits seem a lot better on paper than how they might actually play out.

Web Group is a group @ Brooklyn College
View all posts by webgroup →
← Newer Post
On The Record: This Place Sucks Ass – PUP
Older Post →
NBA Draft Preview: Who Will Go #1?