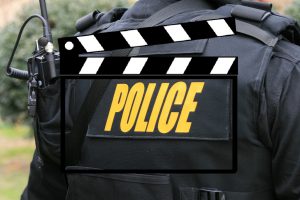 Balzora’s film “How I Learned to Talk to Cops” is expected to be finished in the spring./ Photo edited by
Humza Ahmad

When Haendel Balzora, a Film Production student at Brooklyn College, was a kid, his mother punished him for something he did not do.

“My mother was draining a waterbed in the apartment we were living in, and she accidentally flooded the entire apartment and thought that I did it, even though I had nothing to do with it,” said Balzora. “I was guilty until proven innocent in my mother’s eyes, and that set the temperament that would echo into the rest of my life.”

Loosely based on this childhood experience, his upcoming film, How I Learned To Talk To Cops, tells the story of a young black man who reflects on a moment from his childhood after an altercation with the police.

“I called this situation How I Learned To Talk To Cops because, in a lot of ways, that experience is how I learned how to talk to cops and really any person in a position of authority,” said Balzora.

While that childhood experience may have inspired the film, raising his two-year-old son was a major driving force that made him further examine his own youth.

“It’s given me such a deep perspective on adolescence, discipline, and all sorts of different themes that are essential to this film,” said Balzora.

Balzora also gained perspective by considering the future conversation he would have with his own son about dealing with police.

“I honestly think that me making this film is sort of a reaction to that,” he said, “Finding a way to articulate words for this very important conversation that a lot of Black fathers have with their Black sons.”

He says the challenge will be finding a way to give his son a path to understanding liberty in a meaningful way while also explaining  the real crossroads of being a person of color in the United States.

Balzora felt that it was important to keep the Black Lives Matter movement blazing during the  three day shoot.

“It’s unfortunate but very much expectedly dying out,” he said, “But even as it dies out from massive pop-culture appeal it’s already attached to the most significant year that’s ever existed…our voices are right in the center of that.”

The film, he says, is his expression of “these circumstances,” and he uses the film to “speak on the injustice and criminality of it all.”

Filming was intense for the first-time director, and he was thankful for his team.

“Everyone was so gracious with me about what I didn’t know…it was a really refreshing experience to take constructive criticism…and the [director of photography] was super experienced and helped me with a couple of things in terms of director language,” Balzora said.

The film is expected to be finished in the spring, and Balzora is excited to share it.

“It feels like such a huge win after a really painful year,” said Balzora.