When the dust settled on the historic second impeachment of Donald Trump, spectators were graced with an equally historic second acquittal. Not bothering with any hindsight being clearer business, it’s 2021 for crying out loud, but did this really come as a surprise? Have we already forgotten the last time Trump was impeached on disputable grounds? Sure the prosecution was able to pull in some truly noble figures from the Republican half of the aisle, the likes of which I’m sure we will see proverbial busts of hammered out in the pages of the mainstream media over the course of the next few years for their symbolic contributions to the age of unity. But at the end of the day, the arithmetic was never in the Democrats’ favor to win a two-thirds majority in the senate. The Republican establishment is easy to dunk on but they are not stupid.

Trump was and remains to be a lot of things. As much as it pains me to admit, I think he has more credentials to the title “Organizer in Chief,” than Bernie Sanders, who used that term to describe what his presidency would look like. The man has an army of followers, a mass which was much more vocal and capable of showing up to events than anything Biden has proven himself able to muster. This pool of support won’t go away. While Biden of course secured the popular vote, Trump still pulled in over 74 million people; enough folks that if they chose to, could form a country that would easily slot into the top twenty most populous.

It is this strange, yet powerful, mass of energy that Republicans know they can’t lose. Take the seven Republican votes for conviction out of the equation and you are left with a rigid opposition who is set on harassing the donkeys in charge. They might have to reframe their message a little bit. Maybe a bit less outward racism and disdain for minorities, dial down their contempt for people who can’t afford market priced rent, and maybe find some leaders that have Twitters that are just a few degrees less entertaining to read. These slight tweaks could give the Grand Old Party a face lift that isn’t off putting enough to the point where they can field a few dangerous candidates. These candidates would be running against a party which has failed not once, but twice, to convict a guy who at some points of his presidency, acted like he was trying to get thrown out.

This opinion column will never be celebratory of our previous president. More so just critical of the current administration that insists they are the good guys. If Democrats are the protagonists they frame themselves to be, why can’t they lock up the guy who they have been claiming for twenty four hours a day, seven days a week, to be the most serious threat to democracy our nation has ever seen. Trump certainly was dangerous, but can we all take a moment to appreciate what the “attempted coup” on January 6th actually was.

Call me old school, but when we flip through the pages of history and look at successful coups, we usually see a little bit of fire power. Count me among those who were glad that none of the Capitol Hill demonstrators actually toted the weapons that their beloved 2nd amendment entitled them too, but let’s try to stay on somewhat level footing when digesting the events of that day. The fact remains that of the thousands of demonstrators, police only found guns on seven people. None of which were used in the Capitol building. If the Democrats wanted to charge the president with inciting an insurrection, it would have been helpful if some of his foot soldiers were better armed. In lieu of a well armed militia, the idea then was that members of either the police or armed forces would step in to provide that additional persuasion. Since that didn’t happen, perhaps we can assume that this wasn’t a highly coordinated attempt to remain in power; which was exactly what the Democrats tried to charge him with.

A rat can fit through a hole as wide as his head and Donald Trump can wina case that contains just a suggestion of doubt. Democrats attempting the case, similar to the first time, wasn’t necessarily the wrong thing to do – note: precedent. But what was clear from the first, as is true this go around, acquittal can often just mean no collusion whatsoever. They have handed over another easy victory, and done so after parading how integral this win was to the survival of our democracy. Dang, it’s a shame that winning this case was the difference between having a good or bad country and you just lost.

Let there be hope where you can find it. These proceedings, as goes the way of most of the Democrats’ theatre, was entirely symbolic and devoid of earnest intentions to improve the lives of working people. A charade’s audience is usually divided between those who fall for it and those who are afraid to laugh at the cost of hurting those who arestill invested. How much longer before the first half looks aro 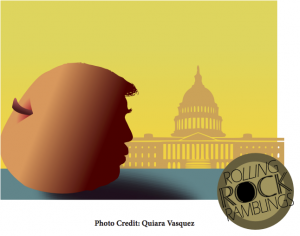 und and sees all the grins from those who are in on the joke? My genuine interest in seeing the world haul itself to a better reality hopes it is soon.