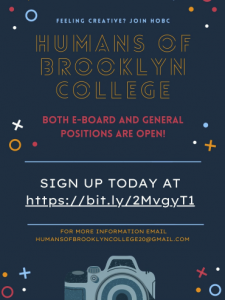 and its surrounding community by telling their stories.

“Rather than just seeing the student based on what clubs or classes they are taking, you see them as a person. They are not just a Brooklyn College student, that’s not their entire identity,” said Marwa Islam, President of HOBC. “Their identity is their background. Our club’s goal is to help students realize there is more to them than just being a student.”

In her freshman year at Brooklyn College, Islam started to take notice of people and their stories around campus.

“I was sitting down and listening to other people’s stories and how they had gotten to their position and I thought it would be interesting to share their stories on a bigger platform,” she said.

In the spring of 2020, her and her friend Jasmine created the club “Humans of Brooklyn College.” Islam was unaware of a similar club that had existed some years before. But after seeing the earlier formation of HOBC from previous years, Islam enjoyed how the club narrated the stories and interviews they captured, and the way the original club conducted their interviews and social presence. Islam wanted to continue with their format.

Now, Islam and her team are working to transition their club to online learning. Due to COVID-19, they are unable to interview students on campus. “It’s really hard because something we were trying to do was have the person take us to their favorite spot on campus,” she said.

Humans of Brooklyn College aims to connect students on an interpersonal and emotionally raw level when conducting interviews.

“We first ask them what their most impactful experience at Brooklyn College has been, and then we base the rest of the interview around that question,” Islam said.

So far the club has conducted multiple interviews and are looking forward to being able to work in person once again.

Islam has a deep understanding of how inspiring others can be and she aims to help capture and display these stories.

When looking for people to interview, the club makes an effort to capture aspects that are often overlooked. One example Islam gave was her experience with her first interview, “The first interview I had was a woman in her sixties in the computer science department.” Hearing the woman’s story was very impactful and moving for Islam, ”Because people don’t really think of age as a factor of diversity because most people at school are in their twenties to thirties.”

As a club that relies on interpersonal connection and interaction, HOBC has faced obstacles in the wake of COVID-19. With remote learning, finding people to interview and join the club has been difficult.

“For me, it’s really hard to find students. I’m so used to meeting students in classes and talking to them, so I have to find a new method of communication,” Islam said. To her, BC offers a supportive space to meet new people, but because of COVID students now experience a lack of connection, “Now all you see on zoom is screens with names on them.”

Regardless of the challenges the pandemic has pushed onto HOBC, Islam and her team still have plans to expand and encourage students to join their mission. As they continue to develop their Instagram and Facebook pages, they also are building their own site with a goal of uploading at least two times a week.

“I am trying to look for people in different majors and love to connect with others,” Islam said. “Those who are passionate about Brooklyn College and the community around it.”

Web Group is a group @ Brooklyn College
View all posts by webgroup →
← Newer Post
As BC Moves Online, Threats Do As Well; BC’s 2020 Security Report
Older Post →
BC Alum Robert Jones Jr. and His New Novel, “The Prophets”