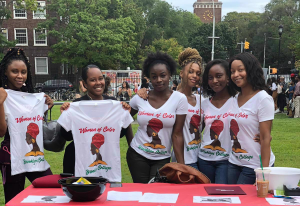 For Black women in healthcare, combatting both the virus and systemic racism has become part of their job in caring for their patients through it all. In celebration of Women’s History Month, Brooklyn College’s Women of Color hosted their third commemorative panel to discuss the critical roles these medical practitioners have assumed.

“At the end of the day, everyone who goes into healthcare is there for the patient,” said panelist Elaine Fletcher, a third-year med student at SUNY Downstate. “So when you identify a problem, you identify something that’s an issue for your patient, you have a duty to bring that up.”

Throughout the COVID-19 pandemic, racial disparities in healthcare have disproportionately affected Black people in the US, but the issue has long been intertwined in American history. Each of the event’s speakers have dedicated themselves to serving their communities by advocating for their patients’ needs. In doing so, they have individually addressed implicit biases, or preconceived notions of certain groups, in their workplaces.

“I think the biggest issue is when you’re going into it thinking that you don’t have that bias is when we run into some trouble,” said Dr. Opokua Amoabeng, an OB-GYN resident at SUNY Downstate Medical Center, who called implicit bias a “blind spot.” Amoabeng also mentioned that just because a medic may look like their patient, they can still have biases against them. “The biggest thing for us is awareness,” she said.

As an obstetrician and gynecologist, Amoabeng is often asked how the healthcare system can address African American women’s mortality rate during childbirth. Though she works with pregnant women first hand, Amoabeng finds the solution to be complex, but it ultimately calls for an uprooting of different systemic racism forms.

“No one is really an expert in this area because it’s very hard,” Amoabeng said. “There are lots of things that are going into it. The systemic issues that factor into the poor outcomes for Black women. In addition to that, we’re talking about implicit bias.” At SUNY Downstate, tending to under-resourced and underserved communities, Amoabeng has noticed several loopholes, such as staff shortages, that have contributed to the medical field’s shortcomings to help all patients. Nonetheless, she finds working at the medical center helpful for her future work in her native Ghana, where she intends to continue providing healthcare for those in her community.

A significant component involved in Amoabeng’s work and that of other medics is communication. Whether it be discussing with the patients their diagnosis in-detail or demanding more funding for certain medical care functions, medical frontline workers are tasked with such responsibilities. Each panelist has continuously advocated for their patient’s needs, knowing the challenges and underlying stereotypes stacked against them.

“Looking at the entirety of your approach of what you can do, and treating that person as the Golden Rule says, ‘as you want to be treated,’ makes a big difference,” said Marla Reid, Assistant Director of Neurology at SUNY Downstate.

Reid and her colleagues in her department participate in a “360 evaluation,” where they can evaluate their own ingrained biases and assumptions of different ethnicities. Through these regular reflections, they intend to remain aware of how they may unconsciously be mistreating their patients.

During the pandemic, many medical practitioners managed to find solace in one another. Waking up for their regular shift, not knowing whether they’d contract the deadly virus that given day, did concern many of these women. But, it was ultimately their drive to be there for their patients through thick and thin that kept them going.

“I can say, COVID is a horrible thing because people die. But we have learned some vital skills in the healthcare arena. We have learned to work closely,” said Dr. Jacqueline Witter, Vice-President for Nursing Quality and Nursing Informatics at St. Barnabas Health Systems.

“And I’ll tell you, our staff – what resilience they demonstrated. What commandery.”

When times got rough, medics would check in with one another for support. To many, battling the virus on the frontline was a testament to their vocation, but also a revelation to their strength. For others, it was also a moment where patient advocation was needed more than ever.

“You make noise until somebody can listen to you,” said Mayfair Afiah Aboagyewah, Registered Nurse Case Manager at Mount Sinai Hospital in Queens.

As the bridge between patients and their providers, Aboagyewah is responsible for ensuring that medical care funds are made readily available. When a COVID-positive patient spent eight months at Sinai and lost her ability to walk, Aboagyewah knew she was in dire need of rehabilitation. The patient’s insurance, however, did not want to pay initially. Aboagyewah made several calls and landed her patient enough days in acute rehab for her to start walking again.

“If I wasn’t a woman of color, and it was one of my colleagues, I don’t think there’d be an issue approving the lady,” said Aboagyewah. “And if she were a white lady, there’d be no issue whatsoever – that one, I guarantee you.”

As COVID-19 continues, each medical practitioner is determined to build their legacy as their patient’s support system in times of need. No matter the challenges they must overcome to advocate for the needs of the disproportionately marginalized Black and minority patients, they are determined to change the systemic issues the healthcare system has long upheld.

“We signed up to get in when times are tough, and be there for our patients even when no-one else wants to be,” said medical student Fletcher.