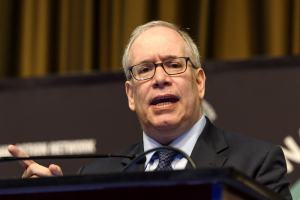 A report by comptroller and mayoral candidate Scott Stringer makes the case for investing in CUNY. / Michael Brochstein

“CUNY is an engine of social mobility and must be at the heart of any plans for our recovery from the devastation of COVID-19,” said Stringer in an announcement on the city’s website. “Few institutions better reflect New York’s incredible diversity and it is time that we as a city recognize the power of CUNY and adequately invest in its students and its teachers. There is no economic recovery for New York without a strong and well-funded CUNY system.”

In the last three decades, there has been an increase of almost 150 percent in CUNY graduates, which includes more than 1 million CUNY graduates from 1991 to 2020. 64 percent of those graduates are people of color.

According to Stringer’s analysis, CUNY graduates working in New York State earned a combined $57 billion annually ($67,000 on average) in 2019, which is an approximated $28.6 billion more than students would have earned without a college degree.

In an Oct. 14 report, Stringer also called for a redevelopment of the workforce, including a proposed free-tuition for CUNY community colleges, a universal paid internship program for CUNY students, and much more to build a better post-pandemic workforce and economy.

“CUNY is essential to any workforce development strategy in New York City—which means it is vital to our City’s economic recovery,” said Stringer in the Oct. 14 announcement on the city’s website. “The pandemic exposed inequities in our economy and worsened the longstanding gaps in our social safety net. As we work to recover and rebuild, we must address these gaps and ensure that New York City’s workforce is strong and ready to take on the opportunities and challenges of the post-COVID, 21st century global economy.”

Web Group is a group @ Brooklyn College
View all posts by webgroup →
← Newer Post
The Stark Contrast In How NCAA Treat Male, Female Ballers
Older Post →
Best Bang for Your Buck! BC Ranks #1 in Best Affordable Colleges on Ranking Site