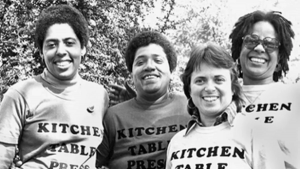 Barbara Smith (on the far left) is pictured here in 1980s in the early days of Kitchen Table: Women of Color Press. / barbarasmithaintgonna.com/

During the 1970s, activist Barbara Smith and her colleagues from the Combahee River Collective were at the forefront of the Black Feminism movement. From the ground up, these Black women were the first to conceptualize and write “identity politics” – the idea that different forms of systemic oppression are built by the intersectionality of one’s several identities.

“We were saying that instead of being add-ons to other people’s agendas or are completely ignored, we need to look at all these major issues and systems of oppression and policies,” said Smith of herself and those who formed Combahee. “We need to look at it from a Black woman’s perspective.”

Having started as a Bostonian chapter of the National Black Feminist Organization, Combahee was mostly composed of Black feminists who had a distinct understanding of the US through a socialist lens. Their 1974 statement, which remains one of their most influential works, stressed the importance of focusing on the ongoing political struggle to bring about change for all who are systematically oppressed – no matter their identity.

“Because if you only understand the identity part of it and not the politics part of it, then you don’t really get to where we were hoping to go,” said Smith. Combahee aimed to establish solidarity by addressing different interconnected struggles. As time passed however, the meaning of identity politics strayed from what its creators had intended. Now, it’s become a buzzword increasingly misused by both sides of the political aisle.

This past March, columnist Meghan McCain criticized identity politics on the daytime show, The View. McCain stated that she didn’t condone the concept’s prioritization of identity. She thought it would lead to underqualified people landing a job, position, or opportunity they otherwise did not deserve. To Smith, McCain’s remarks are an example of the right-wing’s attacks on identity politics, which is rooted in a lack of understanding of its basic tenets.

“Most people who use the term did not get it from its original source,” Smith said, mentioning that many today are not even familiar with Combahee itself.

Identifying as a lesbian and socialist, Smith faced violent hate and backlash for her initiatives. It was through experiences like this that she and the feminists of Combahee saw that their experiences intersected with those of other women of color.

Across Boston and the US, the federal government intended to intimidate lesbian feminist leftists during the mid-70s, placing them under surveillance. They were in search of “anti-war activity,” Smith recalled. “It never really ceases – that anti-left perspective.”

Personally, Smith faced more attacks for her sexual orientation. Over thirty years ago, at Park Slope, her car was set aflame during her time living in Brooklyn. Smith’s apartment was also vandalized and robbed. Both incidents were homophobic attacks.

Though Smith was afraid, her late friend and fellow activist Audre Lorde advised her to transform her fear into political action, speak out against the “terrifying interactions and relationships,” and not stay silent.

“I have been afraid, and I pushed through it,” said Smith. “And the way I was able to push through it is that I was not by myself. We had our little crew.”

With Lorde, Smith later created the Kitchen Table publication to give women of color an outlet to share their political agendas, ideas, and struggles. One of their titles included A Comrade Is As Precious As a Rice Seedling by Filipina poet Mila D. Aguilar, who was arrested for “subversion and conspiracy to commit rebellion” against the Marcos regime at the time of her book’s publication. Under former head of state Marcos, the Philippines was under authoritarian rule and their democratic processes were suppressed.

“We saw ourselves as a publisher for all women of color, not just Black women of color and people from the Caribbean,” Smith said.

As the fight against different forms of oppression like police brutality continues, Smith finds “hope and life” through today’s movements. Protests like those in response to George Floyd’s killing build the first stage of movements, while heightening the public’s awareness of injustices. But beyond these uprisings, there’s more political organization that needs to be done, she said.

“Movements are built out of dissatisfaction, with a critic of the status quo,” Smith said.

Regarding Derek Chauvin’s trial for Floyd’s death, Smith finds it “demoralizing” that there’s even a question of whether he was senselessly murdered. Nonetheless, Smith believes that though these obstacles are implemented to continue systematic oppression, the collective needs to keep upping the ante and continue organizing for change.

“We live in a very harsh reality. You can’t do this stuff by yourself. You have to know that your counterparts are out there somewhere, doing the work,” she said.