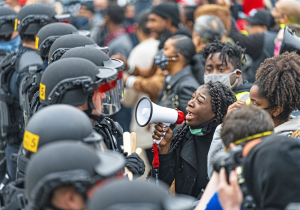 Protests break out across the US following another shooting of an unarmed black man by police in
Minnesota. / Pittsburgh Post-Gazette

Daunte White was murdered at the hands of the police. The killing was explained by the police as a mistaken use of a gun instead of a taser. Our response to it is shaping up to be one similar to what we saw last summer. The problem with that course of action is that it leaves the lives of Black people at the hands of the very lawmakers responsible for the dangerous conditions that people of color are yoked with simply for breathing.

Reform is not the answer. Policing is an inherently racist institution that uses a disproportionate amount of force to instill an idea of peace in a land that was conceived from the union of violence and oppression. What tools are the victims and their sympathizers left with? We can post headlines online, we can donate to Black Lives Matter, and we can march in the streets with an expressed purpose of bringing attention to the issue and applying pressure to the politicians at the helm.

The problem is that these are the same tools we have been using for the better part of a century in the struggle for ending racist policing and murder. These tools, minus the most recent addition of social media, were effective in the 1960s for exposing and fighting the racism that was intertwined within the laws of this land. But what are we to do when discriminatory racism is “illegal” and everyone has “equal” rights? According to last summer and the opening days of this latest public reminder to the ongoing crisis, activists are resorting to the same tools: posting, donating, and marching.

While certainly subject to change, the turnouts for marches this past weekend and so far have been significantly weaker than for George Floyd and Breonna Taylor this past summer. The anger remains palpable but perhaps activists have become slightly aware of the relatively small impact they actually have. I am affirmatively not against marching, but am pointing out that months of protest, which oftentimes turned into rioting, in Minnesota produced the most radical police reform ever seen in this country only for another unarmed black man to be murdered less than a year later.

Whether under the banners of abolishing the police or reforming them, the eventual product of our demands once they are codified by state or federal legislatures will be reforms. You can try to fix up a house built on a sinking foundation as much as you’d like but that won’t stop it from being swallowed by the earth. The hate and greed that are interwoven into the fabric of our society have rotted away any chance of living in the same house we are trying to configure into a ramshackle shelter. We need to rebuild.

A scary thought for centrists, moderates, and anyone averse to general societal shifts, to be sure. But without confronting the foundation that our country rests upon, we, nor our successive generations, will ever see a genuinely equitable society. My frustration with the movement to end police violence is that it is so quick to condemn wrong ways to respond. By prescribing a “right way” to go about protesting police violence, we are hamstringing the raw energy to better our world and placing the burden entirely at the feet of elected officials; who, need I remind you, got us into this mess.

Only the shrouded gods of the judiciary system have an inkling of what is going to happen in the trial of Derek Chauvin. He is, of course, guilty of murder. But his conviction would go along the lines of a symbolic gesture towards a movement without providing any real material changes to those affected by the system making this decision. In the event of him being acquitted, perhaps we will see our nation’s reckoning with the racism that makes the mortar between every brick of every capital building across the country.

I am not going to sit at my desk writing for a student newspaper, albeit a great one, and make calls for a violent upheaval of the system at large. I am, however, going to be steadfastly critical of the way a cause I am passionate about is handled by actors who seem content to work within a system that has proven generation after generation of being incapable of correcting itself in a meaningful way. My frustration will always remain primarily with the system, but as someone who wants to live to see the day that it changes, I also want to actively think about how we best confront it.