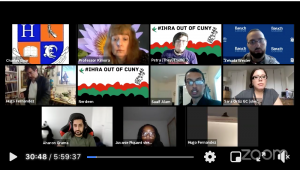 After a six hour meeting, the CUNY University Student Senate voted to reject a controversial definition of anti-semitism on Sunday, Apr. 11. The senate also voted against approving another definition created by students.

The definition in question, from the International Holocaust Remembrance Alliance, was proposed to the USS during an emergency meeting in March by Baruch’s delegates, Yehuda Wexler and Joel DeLa Cruz. Opponents of IHRA’s definition say that it conflates anti-semitism with criticism of Israel, and endangers the voices of Palestinian organizers.

“It purposely sets out to do that, to conflate anti-semitism with anti-zionism,” said Nerdeen Kiswani, one of the USS delegates for the CUNY School of Law, and President of that campus’s Students for Justice In Palestine. “I felt responsible to explain to my colleagues the harms of IHRA,” she told the Vanguard. Kiswani and other USS members who opposed IHRA say that certain wording in their working definition of anti-semtism has been used by Pro-Israeli groups to target Palastinian groups, labeling them as anti-semitic. “To me the most problematic thing about IHRA is the way it uses broad definitions,” said Petra Gregory, USS delegate for the College of Staten Island.

Aharon Grama, one of Brooklyn’s delegates to the USS, made a motion to amend the IHRA definition, which he was not personally in favor of, so it is more clear on the subject of the State of Israel and the rights of Palestinians.

“I was all for amending it. We can add support for Palestinians and saying that we think Palestinians deserve the right to self-determination.”

Grama also suggested moving the discussion to the steering committee so they could arrive at a consensus that the rest of the senate could vote on. “I didn’t want it to be a result like we have now which is no definition,” he said.

However, the opponents to IHRA saw amending the definition to be counter-intuitive, and wanted no association with it at all.

“It makes no sense to reference something if we are going to edit it,” Kiswani said.

Kiswani instead helped introduce an alternative definition of anti-semitism written by the Jewish Law Student Association at CUNY Law, which was also voted down by the University Student Senate. JLSA was already drafting their definition before the current situation arose as a proposal to CUNY.

“JLSA wanted to give them a definition so they can’t claim to not know how to respond to this situation,” Kiswani told the Vanguard. “These are legal questions, as future lawyers things like this and definitions matter a lot to us.”

Grama and others argued the JLSA definition was too vague in its definition, leaving out direct references to aspects like Holocaust denial.

“I think it’s a little bit half baked,” he said, though applauded the work JSLA did in drafting the definition, and stated that USS should have a definition on record. “It’s important to recognize what is anti-semitic and what is not anti-semitic, and since the lines are very blurred I think adopting a definition in general will be very helpful.”

Grama abstained on the vote to approve IHRA’s definition and voted no on approving JLSA’s definition, which Kiswani argues is not vague at all.

“The point they [JLSA] were trying to bring here is that any hatred towards Jews for being Jews is anti-semitism, and I don’t think that’s vague,” Kiswani said.

Kenneth Stern, a world renowned author, attorney in the field of anti-semitism, and also the lead drafter of the very definition that the IHRA has adopted, makes the case that his working definition of anti-semtism should not be referenced for use on a college campus.

“No definition of any type of bigotry, racism, hatred, should be imposed on a college campus,” Stern told the Vanguard. “There shouldn’t be cut and fast rules, partly because the purpose of campus is to explore ideas, not to label them as hateful before you explore them.”

Stern wrote the definition in 2004 when attacks on Jews in Europe were high. The definition was intended “with the desire to guide European data collectors,” with a common frame of reference for reports about anti-semitism. Stern also acknowledges the definition has been “abused” to conflate anti-zionism with anti-semitism and harm pro-Palestinian voices.

“I think it has been used to tar some pro-Palestinian speech.” he said. “It was never intended to say ‘lets have this definition and apply it to specific instances of speech’, especially on a campus.”

Kiswani received attacks and threats online for her stance on an already divisive issue.

“One person said I should have my neck slashed from ear to ear,” said Kiswani, “Although I am not a stranger to that.”

Going forward, it is uncertain whether or not USS will revisit adopting a definition of anti-semitism.

“I think honestly the plenary might simply be reluctant to bring it up again,” said Petra Gregory, who helped sponsor the JSLA definition. Both parties are in favor of eventually adopting some definition though.

“We’ll bring it back one way or another,” Kiswani said, adding that more needs to be done to combat anti-semitism and racism towards Palestinians. “We don’t need just empty rhetoric, we need solidarity and people standing together,” she said.