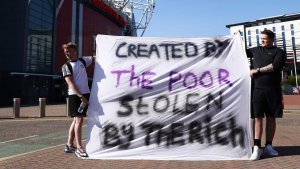 The past two days has exposed a tear in the fabric that knits together the passions of the masses and the interests of large corporations. The recent attempt of 16 of the largest soccer clubs in Europe to break rank and start their own “Super League” has failed. On paper, this succession would have been an incredibly lucrative endeavor for the clubs involved to corner a market for large teams playing one another and leaving smaller and mid-sized teams left to fight over the revenue scraps. The revolt’s failure speaks both to the blatant interests of the corporations that run these teams and the power of the masses who outright rejected their scheme. At the point of the scheme was an attack on the very heart of why people watch sports. It’s failure is a victory but one that must be celebrated in caution.

Sports are cool. You don’t have to be a fan of any one team or a religious spectator of any one sport to appreciate the great drama of human beings taking part in a theatrical form of warfare. There are no weapons in soccer other than one’s footwork, strength, and speed. But the game itself, like all sports, is fascinating because of the stakes involved. It is not life or death but pride or humiliation. Each of us know the latter pair too well, and when we watch the sports, we know the stakes before the whistle blows.

Cormac McCarthy’s writing on humans’ natural inclination towards warfare speaks to the inherit-ness of sport: “Men are born for games. Nothing else. Every child knows that play is nobler than work. He knows too that the worth or merit of a game is not inherent in the game itself but rather in the value of that which is put at hazard.” I explore this understanding of sport before weighing in on the Super League episode because it is important to know the stakes.

The current European football structure allows for a large domestic league pyramid in each of the large European countries. These leagues are tiered so that each season is played with the stakes allowing for a few teams at the top to be entered into the Champions League where they compete against the other top teams in Europe; and the lower teams of each league to be threatened with relegation to the tier beneath them. This organization allows for the poorest team in the outskirts of Northern England to, hypothetically, have a chance over a few years to play against the best teams in Spain or Italy.

Money, and how much a club has, makes the outcomes somewhat predictable. Those with the most cash can afford the best players, play the highest level of soccer, and in turn regularly compete in the European league. The controversy in question is that a couple of the largest clubs spread across the different domestic leagues conspired together to form their own league. This league would have no admittance standard other than the capital that can be put down. Fans, both of the conspiring teams and those that were left out, were unanimously pissed off. Between players’ statements, demonstrations outside of stadiums, and armies of both fans and pundits voicing their anger, the voices of the people were heard. Banners were strung up on the grounds of Arsenal, Liverpool, Manchester United and the other clubs vying to secede. Busses filled with players ready to face off were blocked from entering the stadiums by fans who insisted that their interests be platformed over the businesses who bankroll the teams. The Super League has been defeated. For now.

I am a fan of the beautiful game and want to continue to watch as it is currently structured, which is already muddied by massive investment and governed by institutions who themselves sleep in beds made out of stacks of euros, Saudi riyals, Chinese yuan, US greenbacks, and other currencies that have an interest of inflating its value via profiteering off of the best clubs in Europe. Attempts like the Super League are nothing new, and we will continue to see spin offs for some time into the future. Let us rejoice in the peoples’ victory and bolster our defences for the next wave.

Sports represent both the interests of ordinary people and incredibly powerful interests behind the curtains. These two interests have existed in a strange harmony for a long while where we get to enjoy the game and they get to make their money. The dark power, however, often makes a foray from behind the curtain when trying to push its latest scheme down our throats. When they do, the burden for preserving the things we care about falls on us. This is a story that exists in all theatres of popular culture, from the poorly maintained fields outside of London to the stages that litter music festivals around the US. There are consumers and there are curators of the content we have access to. The interest of the curators will always be to make more money. Oftentimes, this is done under the guise of making something more engaging or more entertaining, but it is not for our benefit. It is for theirs.

The entire purpose of the Super League was more cash in the hands of investors. The only problem was the meddling fans who pay to watch the games. Even Boris Johnson was opposed to it even though it was a near perfect allegory for Brexit. The show of solidarity was beautiful, especially in the face of powers that are malignant not just in sports but in every facet of our culture.