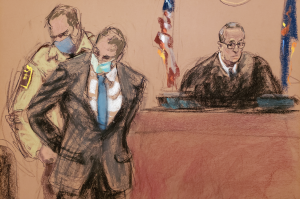 A sketch from inside the court house where Derek Chauvin was convicted. / Reuters

Last Tuesday, Apr. 20, after 10 hours of deliberation, former Minneapolis police officer Derek Chauvin was found guilty in the murder of George Floyd on all three charges brought against him- second-degree murder, third-degree murder, and manslaughter. Nearly a year after Floyd’s murder in May and the subsequent Black Lives Matter protests worldwide, many Brooklyn College students opined that the verdict was an act of accountability. Others believed that Chauvin should not have been found guilty on all charges.

“I don’t even want to call it a first step, but it’s something. The guilty verdict is a step, but it’s the tip of the iceberg,” said Brittany Thevenot, a BC student and the head of Press and Public Relations of BREATHE,  a grassroots organization that aims to eliminate qualified immunity for police.

Chauvin faces a maximum of 40 years in prison, with his sentencing scheduled for June. After three weeks of trials, the jury deliberated in favor of the prosecution, who argued that Floyd died due to Chauvin’s actions. They presented two different incidents from Chauvin’s police records to support their case, arguing that he knew the difference between life and death inflicting practices. Therefore, the prosecution explained, Chauvin would’ve known that his hold against Floyd was lethal.

“The neck is very delicate and has many connectors to the brain and the rest of the body,” said BC pre-med student Mohammad Tusar. “Even a minute of someone putting themselves on your neck with their knee would have you out. Imagine nine minutes.”

Throughout the trial, Tusar was tuned-in actively, watching the testimonies of witnesses who came to the stand. He thinks that the evidence, such as the viral video posted by 17-year-old bystander Darnella Frazier, was conclusive of Chauvin’s role in Floyd’s death. So much so, he believes that Chauvin pleaded the fifth and did not take the stand because he knew that the results were set in stone.

“This case was a big sigh of relief but not a cheers of change. This is the bare minimum,” Tusar said. “We need to make sure we hold cops accountable in every issue of police abuse of power, no matter the victim’s race.”

With the verdict coming out after the police-killings of Daunte Wright, Adam Toledo, Ma’Khia Bryant, and others, many BC students think that more change needs to be done. From the “blue wall of silence” held by police officers who do not report the malpractices of their colleagues, to the reallocation of law enforcement funding, many think that this conviction should pave the way for more reform.

“Excessive force has always been an issue in the police force, and it has always made me angry,” said BC film student Paola Muñoz, who initially didn’t expect a guilty verdict.

Though she did not follow the trial in real-time, Muñoz questioned whether Chauvin recognized and felt guilty for his actions that led to Floyd’s death — though he likely didn’t have the intent to kill him, she noted.

“Maybe it was a mistake by him, maybe he wasn’t intending to, but I would feel a lot of guilt even if I didn’t mean to do something like that,” Muñoz said.

To date, Chauvin’s conviction is a rare occurrence in the American criminal justice system. With the arrest rate of officers for on-duty police shootings being around one percent, as reported by Vox, one BC student, Yasmin Asad, opined that America’s perception of policing is different from its actual role. Rather than protect and serve, cops essentially “serve as cleanup crew after the damage has happened,” said Asad.

“I think one of the reasons we don’t see convictions is because the law is not designed to protect citizens as much as it is to protect institutions of power like the police,” said Asad, who was keeping up to date with the trial for her course The Politics of Criminal Justice.

Though Asad thinks the trial was fair, for both the prosecution and defense, she thinks that the jury’s decision was a direct consequence of the protests and rioting made in response to Floyd’s murder last summer.

“I think what would have made it a more fair trial is if it wasn’t as publicized, meaning that the jurors wouldn’t have to face the fact that everyone’s eyes were watching them while doing this,” Asad said.

Shortly after the verdict was released, an alternate juror for the Chauvin trial, Lisa Christensen, who did not have a say in the final deliberations, shared her perspective in the courtroom. During her interview with KARE 11, she revealed that though she would’ve found Chauvin guilty for Floyd’s death, the idea of deliberation while having the trial televised “made it more intense.” She also commented that she was afraid that there would be more rioting, or threats towards her if people “were not happy with the verdict.”

“From her reaction, I would not be surprised if the other jurors that were actually doing the decision-making if they were actually influenced by that rioting or the threat of rioting,” said a BC student named Christian, who did not want to share his last name. After watching most of the trial in real-time, reading the autopsy report, and seeing the video of Chauvin kneeling on Floyd’s neck, Christian would have not found Chauvin guilty of second-degree murder.

“I do think he contributed to his death, but it wasn’t intentional,” Christian said. “Based on the evidence it seems like it was contributed to the drugs and they also thought he was on drugs at the time.” A toxicology report did reveal that Floyd had drugs in his bloodstream, although medical experts who testified for the prosecution argued that it would not have been enough to contribute to Floyd’s death. Though Chrisitan thinks that the investigation was important to carry out, and the trial was held fairly, he hopes Chavuin goes onto appeal his second-degree murder charge.

Though Chauvin’s conviction brings some hope for police reform for many BC students, Thevenot believes there’s more to be done in terms of recognizing the police brutality experienced by Black women in America. She notes that Breonna Taylor was also killed by police during the same time as Floyd, but her case was not granted the same accountability and attention in the courtroom.

“It also has to do with how Black women are treated and disrespected. So it’s just kind of a bittersweet feeling,” said Thevenot. “This isn’t justice, this is accountability. You don’t get to kill someone and get away with it.”