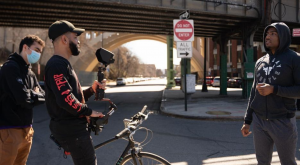 Suarez on the set of his thesis film, If A Tree Falls, at Inwood Hill Park.\
Instagram @ifatreefallsmovie

Brooklyn College student Marcos Suarez is preparing to present his senior thesis film If a Tree Falls, a retelling of his life as a boxer struggling with an autoimmune disorder.

Though he had no idea where his senior year film thesis would lead him, Suarez took on the endeavor for many months, working around COVID-19. “The story is about someone who had it all, got sick, and tried to hide it from everyone until they couldn’t anymore,” Suarez told the Vanguard.

At first glance, a viewer of If A Tree Falls might not realize that it reflects a major part in director and writer Suarez’s life. Growing up, Suarez was raised in Massachusetts until he moved to the Bronx at eight years old. When he was ten, Suarez began to box and his life changed. “Boxing was always my number one priority, and when I was in high school, my dad was my boxing coach and was very strict on just boxing,” he said.

It was in 2014 that Suarez found he’d be confined to his bed for the next eight months due to an autoimmune disease. “Boxing had been my main focus in life, and then I got sick and had to stop everything,” he said. “I’ve never really talked to anyone about it, and when I did, I kept it very short because it’s not something I’m good at talking about.”

Although Suarez’s main focus had been boxing before he got sick, he was always a creative kid, especially after chancing upon the world of film. When he was younger, Suarez won a camera in a raffle and has been carrying it with him everywhere ever since. “I was always the friend who recorded everything,” he said. “I taught myself everything, and I fell in love with it.”

Suarez kept a large part of his creative life hidden from his family, including his passion for film, until one fateful day in high school. “My dad had been called in, and the counselor asked if he knew how talented his son was,” Suarez said. “He showed my dad some of my videos, and ever since then, my dad saw my talent.”

Three years after putting his life on pause due to illness, Suarez came to Brooklyn College to study film in 2017. “I wanted to go to NYU or Columbia, but realistically I couldn’t afford it, and I heard Brooklyn College was the next best thing.” Even though Brooklyn College was an hour and a half away from his house in the Bronx, he knew that it was the right choice for him.

Suarez had always planned to tell his story. “I just never thought it would be a thesis. I thought I would be telling this years from now,” he said. When Suarez was stuck in bed, he told himself, “If I make it out of this, I am going to tell my story.” And it was then that he settled on a title for his project – If a Tree Falls. It’s a reference to a saying that hits close to home for Suarez, who has struggled with emotional trauma and his mental health, while quietly fighting his disease.

Suarez hopes that people will see the connection between the title and the film itself. “I play a lot with the title of the movie, I never directly say it, but there are references and a clip from ‘Fresh Prince of Bel-Air’ that talks about the title.”

When first taking his ideas to paper for his script, Suarez found that his draft was initially “horrible.”

“I was really bad at writing, and the story turned into what it is through skills, me getting better at storytelling, and knowing how to stay connected with the audience,” he said. Suarez hadn’t begun to write the script until January, and with COVID-19, Suarez faced new restrictions and challenges.

From the get-go, Suarez saw the impact of his story when he began to share his ideas and initial writings for the film after seeing his peers’ reactions. “I think I’m generally pretty overlooked in the program,” he noted. “Being from the Bronx and people knowing I’m from the Bronx, I think they just overlook me and don’t take me as serious when they see what I have planned for this story.”

Suarez hopes that his story can shine a light on those who suffer from autoimmune disorders and often do not receive as much attention as others.

In one of his classes, Suarez was taught how to pitch films and he opted to pitch one around his health struggles for his class with his professor. “The entire class was shocked,” he said.  “Someone that was in my crew ended up saying that it was crazy cause he also had an autoimmune disorder, and my project inspired him to write his thesis.” Before, he had never shown pictures or stories from his time when he was sick. Now here he was, not only opening up about it all, but committing it to film and making art of it.

As Suarez began preparing for filming, he knew he needed to find the right characters, specifically a strong-willed actor that would play “Mark,” or Suarez himself. “They need to have these emotional moments and display you at your worst when you’re sick,” he said, “But also show these different versions of yourself, and I don’t think these are easy things to do.”

Suarez found himself on the casting platform ‘Backstage’ for weeks, almost on the verge of scrapping his project before finding Leroy S. Graham III, who had more of a stage and theater background, but fit Suzarez’s vision for the role. “I was like, ‘Woah, I want him’,” he said. Once they began working together, Suarez saw parallels between himself and Graham’s performance.

As the year continues, Suarez will keep preparing his film before releasing and potentially pitching it to a production company. “This story is so long, and I’m only telling a very short version of the story,” he said. Suarez hopes his anecdotes reach more people and help inspire someone to find their voice.

“I think it’s time for me to share the story and put it out there and just prepare for it to eventually be something bigger than what it is now,” he said.