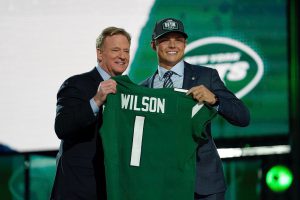 The 2021 NFL Draft was a unique one. Many players did not attend in person due to COVID-19, which led to some star players falling in the draft, along with this draft class just not being all too exciting. All the teams in New York had solid drafts and built for the future, and all of them seemed to draft one position of need.

With the second overall pick in the draft, the New York Jets took Zach Wilson out of BYU, which was the obvious choice after trading away Sam Darnold to the Carolina Panthers. Wilson has the potential to turn into something special, even more so in the LaFleur/Shanahan offensive scheme the Jets will be running. General Manager Joe Douglas then spent the next three picks on offensive players to offer more support for Wilson than the Jets ever did for Darold.

Trading up nine spots for guard Alijah Vera-Tucker might have been short-sighted, but Vera-Tucker is a solid player who will help lock down one side of the offensive line with last year’s 11th overall pick Mekhi Becton. In the second and fourth round, the Jets drafted offensive weapons in wide receiver Elijah Moore out of Ole Miss and Michael Carter, a running back out of North Carolina. Moore posted a fantastic 4.32 40-yard dash time at his pro day, while Carter posted a 4.5. Both will be weapons that could get many reps on a team with very few offensive weapons.

Even though the offense is in desperate need of playmakers, the Jets defense also is void of talent, especially in the secondary. This is why the team trading up in the third round for Vera-Tucker hurts. The Jets spent their last six picks on defense, and five of those picks focused on the secondary.

Jamien Sherwood from Auburn and Hamsah Nasirildeen from Florida State is a strong safety/linebacker hybrid who will probably see time against fast players. Out of Duke, Michael Carter II has a high upside as a slot corner with insane speed, at a 4.30 40 time, but he is on the smaller side at 5’10.”

Jason Pinnock out of Pittsburgh and Brandin Echols from Kentucky are the other two corners, but neither seems like they can come in and start day one on the outside, which is where the most significant issue on the Jets defense. Jonathan Marshall closed out the draft, a defensive tackle from Arkansas and solid run-stopper.

The Jets’ draft overall was solid, but you can’t build a Super Bowl team in one draft. They got pieces on the offense to supply support for Wilson, but their defense will still suffer from no corners on the outside who can cover elite wide receivers. The Jets will most likely still have an early draft pick next season to hopefully address some of the holes on the defensive side of the ball.

The Giants General Manager Dave Gettleman did something he has never done in his nine drafts as a GM, which is trade back. He actually did it twice this draft—trading the 11th pick in the draft for another first-round pick in next year’s draft from the Chicago Bears, and trading back again in the second round to get a third-round selection from the Miami Dolphins in next year’s draft. The Giants got a haul of draft picks to add value in next year’s draft or for possible use in a trade, and that was one of the most significant draft-day moves the Giants made.

The Giants addressed all of their primary needs in free agency but one, which was the offensive line, which they then ignored in the draft. However, the Giants drafted three quality players who will make an impact on the team right away.

Kadarius Toney out of Florida is a speedster weapon at wide receiver and is a home run-hitting playmaker, either off handoffs, screenplays, or short dump off routes. Toney is a blow-the-top-off-the-defense weapon, and the Giants needed a player like that. The Giants have made a massive effort to supply quarterback Daniel Jones with weapons this offseason after being one of the worst offenses last season.

Azeez Ojulari, out of Georgia, is an outside linebacker/defensive end who can get after the quarterback. Ojulari is a perfect fit for the defense that defensive coordinator Patrick Graham runs. Ojulari was seen as a first-round talent, but with some injury history, at pick 50, he is a steal if he can stay on the field. Out of UCF, Aaron Robinson is a do-it-all corner, who can play slot, outside, or even safety. You can never have enough defensive-backs in a passing league, and the Giants are loaded at that position.

Elerson Smith is an underrated pass-rusher out of Northern Iowa picked in the fourth round. In a pass-rushing group that lacks in star talent, Smith could work his way into the rotation. Gary Brightwell is a running-back out of Arizona, and if Saquon Barkley is healthy, will probably get next to no playing time unless it is on special teams. The same can be said for Rodarius Williams, a corner from Oklahoma State, who in a stacked defensive-back unit will need to show out big to get actual defensive snaps but will most likely have a role on special teams.

The Giants added value for the future to ostensibly address the needs on the offensive line and also added to already strong position groups to make them even stronger.

The Buffalo Bills had a down year at the draft, in the sense that they needed to fill three big holes, and they only filled one. They drafted pass rushers Gregory Rousseau, from Miami, and Carlos Basham Jr. out of Wake Forest.

Both can make significant impacts on an aging defensive line that can’t get to the quarterback. Then, the Bills didn’t draft a running back the entire draft, and only drafted one corner in the sixth round, Rachad Wildgoose out of Wisconsin. They did spend the rest of the draft securing depth for their offensive line, drafting three throughout the draft, but the offensive line is already set, and as they are in the Super Bowl window, you would think they would go for more impactful players. The Bills also drafted wide-receiver Marquez Stevenson out of Houston and Safety Damar Hamlin out of Pittsburgh in the sixth round, who are more projects than play-now guys.

In this draft, the Bills could have dove headfirst into getting players that could start right now at their three positions of need, but they only did this with one position.

The New York teams all have different outlooks and all had different drafts. But like in any draft, especially in football, only in the future will we be able to tell who was really successful.