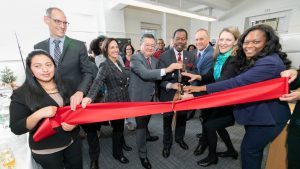 Jesus Perez (fourth from left ) cutting the ribbon for the Immigrant Student Success Office in Dec. 2019./ @BklynCollege411 on Twitter

To close the month of April, the Immigrant Student Success Office (ISSO) hosted their first annual Immigrant Heritage Week to celebrate the contributions and success of immigrants within the Brooklyn College community.

“This event was necessary, especially with COVID, in order to celebrate the work done by immigrants,” Jesús Pérez, ISSO’s Director, told the Vanguard. “A huge portion and grunt work during that pandemic has been supported by immigrants.”

ISSO is a program that has existed since September 2019. Their primary objective is ensuring that immigrant students have a place to turn to for support in their academic careers. This includes a wide variety of services, such as legal and financial assistance, mentorship, and advisement. “We are very lucky to have so many partnerships with the faculty and departments throughout Brooklyn College,” Pérez said.

ISSO aims to make the transition to college easier for all student immigrants, including first-generation, undocumented, and international students. “The biggest issue when you are new to the country is knowing who to turn to for support. CUNY and Brooklyn College want students to feel comfortable enough to ask for help,”  Pérez said.

ISSO’s Immigrant Heritage Week was a combination of information for current and future students, as well as a celebration to honor those graduating from Brooklyn College.

“I think it was a very emotional week for students, especially those that are reaching the end of their career here,” said Pérez. One of the focal points of the week was the Student Recognition Ceremony and ISSO celebration.

The ceremony was conducted over Zoom and featured awards for students and faculty that participated in ISSO. Pérez highlighted how important it is that incoming students were able to see that when they come to Brooklyn College, there is a team there that wants to see them succeed.

One of the ways they hoped to accomplish this was through a virtual panel of graduating students who shared their recent experiences and recommendations for the next generations entering Brooklyn College. Pérez says that in the future they hope to show the recording of the panel to new students.

One problem that Pérez and the members of ISSO faced when planning the week was Zoom fatigue and a lack of engagement. Although their events did see a strong amount of attendance. “Zoom fatigue was a huge challenge for getting students to be engaged and actively participate in the conversations,” Pérez commented.

COVID-19 has made reaching out to students difficult. “Normally we are working in the office every day to connect with the students. The pandemic made it hard for us to be there for the students,” Pérez said. This difficulty made it especially important to Pérez and ISSO that they hosted their events.

On top of celebrating the success of immigrant students, ISSO’s Immigrant Heritage Week also had a multitude of speakers. One of them included Dr. Amanda Marin-Chollom, an Assistant Psychology Professor from Central Connecticut University, who presented a seminar called “Latina Breast Cancer Survivorship Within the Context of Family.”

ISSO was grateful to have strong ties to the BC community and partnerships with other organizations who contributed to the week-long festivities. When ISSO was inviting BC faculty members to host an event they were “really focused on asking what they could bring to the week,” according to Pérez.

Throughout the week, ISSO continued to emphasize the celebratory aspects of the community. “Brooklyn College is such a diverse campus and a large part of this great education is because we have people from all over the world,” Pérez stated. He is hopeful that they will continue to have a week to commemorate the hard work of immigrants.

“This was a needed conversation,” Pérez said. “This week has helped show many things that happen behind the scenes with students and their families.”