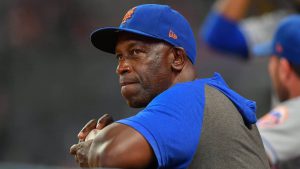 Shortly after the conclusion of Monday’s 8-7 loss in St. Louis, the Mets announced that hitting coach Chili Davis would be fired.

During the 2021 offseason, the Mets made a considerable number of changes to their front office and baseball operations staff. The goal was to shift the organization to a more modern model, embracing data like never before. To that end, according to SNY’s Andy Martino, Mets President Sandy Alderson “strongly considered” firing Davis in the offseason, but ultimately chose not to. Chili Davis, who was a holdover from the previous administration, was not hired by Mets interim General Manager Zack Scott or Alderson.

Given that the organization is moving in a data-driven direction, Davis’ approach and reputation as an “old school” style hitting instructor may have been the driving factor in his dismissal.

During the Mets’ current slow offensive start, the team ranks 17th in the majors in wRC+ (weighted runs created plus) at 96, last in home runs, last in runs batted in, and 29th in hits.

When digging even further below the surface, as the analytics-driven front office is doing, the data on hitters doesn’t look much better. According to Baseball Savant, the Mets are dead-last when it comes to the number of hard hit balls (95 mph + ). In Barrels per Plate appearance, a stat that measures how often batters hit the ball on the best part of the bat, the Mets are 19th.

Key cogs in the Mets’ daily roster like J.D. Davis, Brandon Nimmo, and James McCann have not yet reached enough “balls in play” for their stats to normalize. Mets hitters like Pete Alonso, Francisco Lindor, Michael Conforto, and Jeff McNeil have achieved a “normalization point,” but just barely; certainly not enough to warrant someone’s firing on numbers alone.

Still, it’s hard to look past the struggles of the Mets’ greatest investment. The $324 million man Francsico Lindor is hitless in 21 straight at bats and has only 14 hits in his last 86 at-bats, which is good for a .163 average. Davis’ failure to implement corrections to Lindor’s swing and approach may have shortened the patience of the Mets’ front office. Coupled with the fact that Davis was on thin ice prior to the season, the pot boiled over.