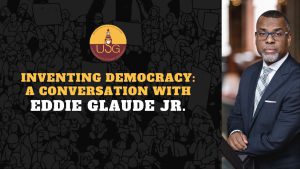 Since its origin, America’s racial inequality has haunted it and it’s survived the passage of time. With the rise of newer generations, generations cognizant of how broken the state is and how much reform is needed, the Undergraduate Student Government at Brooklyn College invited Professor Eddie S. Glaude, chair of Princeton University’s Department of African American Studies, to share his insight and reimagine a new multiracial democracy.

“We find ourselves, and there’s no easy way to deny it, in a moment of transition,” Glaude declared. “America is changing and the substance of that transformation is not clear – at least to me it isn’t. Who we will be has yet to come into view.”

A successor to USG’s previous conversation with renowned journalist Chris Hedges, Glaude spoke with moderator and USG secretary Nadav Raz about “Inventing Democracy,” the night’s headline that stems from writer James Baldwin’s idea that hope is born every day, as is the pursuit for a new politic.

In his latest book release, “Begin Again,” Glaude takes a deep dive into the late author’s lessons on race and democracy in a country that’s always changing on the surface but not fundamentally. In doing so, Glaude breaks down how to dismantle the value gap, or America’s valuing of white people over others. The first step in this collective effort, he says, is to tell ourselves the truth of America’s racist history.

“Americans are trapped in a history we refuse to know, but carry within us,” said Glaude.

In light of former Minneapolis officer Derek Chauvin’s guilty verdict for the murder of George Floyd, Glaude discussed with the audience how America’s throughline of the value gap does not end with one courtroom deliberation. As the verdict was waited for and announced, there were other police killings going on in the streets, ending the life of 16-year-old Ma’Khia Bryant and others. These acts of violence on the account of race are rooted in a history of racial inequality.

“I imagine ghosts dancing around the courtroom. The ghosts of our dead who never received justice,” said Glaude, recounting his op-ed about the trial for Time Magazine. “But I ended the piece in reference to Ma’Khia Bryant, wondering if her ghost would show up to the next trial.”

Glaude made clear to the audience that though Chauvin was held accountable, America is “still governed by the slave codes in the country,” echoing Baldwin’s words. Not that Baldwin was referring to Black people as slaves, and police as slave catchers, but that at its core police treatment is shaped by the general disregard for non-whites. To eliminate the racism intertwined with police conduct, Glaude argues that it’s important to dismantle the idea of “whiteness” that belittles non-whites and upholds the value gap.

“We need to break the back of whiteness. We need to finally bury it, kill it. Put it in the ground – forever,” Glaude said.

Baldwin came to this line of thinking through his “radical inversion,” where the idea of Black people being “the problem” is replaced with questioning why society even placed that label in the first place.

“The world wants us to believe that we’re the problem,” Glaude said. “I’m not the problem, I’m not a problem. You are.”

After four years of former President Trump, and the rise of sentiments that America should be a “white nation,” Glaude sees President Biden as representative of the shift in politics the country is undergoing. The night before Glaude spoke with BC, Biden addressed Congress to mark his first 100 days in office, calling for tax reforms to overhaul the US economy.

To Glaude, Biden’s words embodied a “social and moral contract” that showed the collapse of Reaganism and its assumption that “big government is bad.” One of Reaganism’s pillars, which has withheld the test of time, is its “exploitation of white resentment” and “white fear,” according to Glaude. Today, as the nation makes the shift towards a post-Reaganism era, younger generations are seeing the necessity of bringing about change.

“We are still in the eye of the storm, the tail is coming,” Glaude said, referring to the transition from today’s “eclipse of the public” to the multiracial democracy Baldwin envisioned decades ago.

To sustain this change, Glaude tells the audience to allow themselves to reflect on the traumas of American history in its entirety like Baldwin did when leaving for Paris in 1948 to flee the racism he encountered as a Black man in America. Glaude believes that seeing the truth together as one tapestry unveiling the lies of America’s narratives, like the value gap, will set ablaze hope and a vision for a new democracy.

“We must risk everything. We must push the politicians because they inevitably disappoint,” said Glaude. “Our faith must not reside in them but must reside in us. And who knows, we might very well get it right this time.”