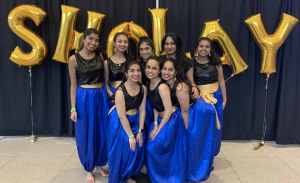 Bharatanatyam: a Sanskrit word that in English could be understood to mean “India acting,” is more famously recognized as one of India’s oldest classical dance traditions. It is a dance made up of meticulously directed movements, which the women in the Brooklyn College’s Indian dance team, Brooklyn Bahaadur, can attest to being quite physically demanding.

“Bahaadur means one who is brave,” Rebecca Barghese, the club’s President, told the Vanguard. “I believe that bravery is really inherent in the way that all of us carry ourselves. And even in making this team–there was a lot of trepidation if this will work out since Brooklyn College is a commuter school.”

Barghese has been practicing this dance since she was five years old. So when she arrived at BC and saw that the Indian dance team needed some serious rebranding, she and two other students, who are now the Vice President and Secretary of Brooklyn Bahaadur, put their heads together to form a new concept.

The obstacles the team thought would interfere with their success turned out to be non-starters. Each of the 11 members grew accustomed to dedicating at least six hours of their busy college work-weeks to practicing dance routines with the goal of entering intercollegiate competitions.

Two years after their rebranded club’s inception, the dancers found a place at one of the larger dance competitions in New York state: Sholay, hosted by the Stony Brook South Asian Student Alliance.

The club was well on their way to great heights. Bahaadur members would gather to practice more structured Indian dances like Bharatanatyam and Kathak–two styles that resemble the intricacies of ballet with every body part accounted for. They would also practice Bhangra, an energetic dance that requires a lot of leg muscle, and Bollywood cinematic dance, an expressive combo of Kathak, Bhangra, jazz, hip-hop, Arabic, and Western dance.

“We had something different. We were more willing to be experimental and be out there a little bit more with what we wanted to do. And that’s because of the girls on my team–they’re amazing, and they all have such different strengths,” Barghese said.

The club has become an exemplary showcase of Brooklyn College’s diverse student body. While the team mainly executes dances with Indian influences, you’ll find classic hip hop moves like tutting and krumping practiced by members of the Bahaadur squad, thanks to its unique make-up.

“Our student body comes from all walks of life. And I believe that that’s what made our school distinct, even when we went to competitions and other schools. Other teams–they’ve been established for maybe 20, 30 years. So they have the consistency,” said Barghese. “But even though we were a new team, we were able to get into those competitions because of, I believe, our diversity. I think that was our strength.”

While meetings at the West End Building on campus promptly came to a halt due to COVID-19, the club has remained active on social media by promoting mental and physical health every Wednesday with advice, meditation, or healthy recipes. They are currently fundraising for COVID relief in India along with other BC clubs and have raised thousands of dollars for the Black Lives Matter Bail Project that aims to end mass incarceration.

The Bahaadur women also do Zoom meets and dinner dates to keep their friendship alive. The team has quickly formed a camaraderie that makes Barghese refer to her fellow dancers as “my girls.”

“I’ve seen other dance teams that are phenomenal, brilliant, and amazing, but there’s so much infighting,” she said. “All of us have that mentality that we want to create a really safe and happy space to dance and do something that we love.”

The club is looking forward to getting back on campus, blasting some music, and preparing for their next competition.