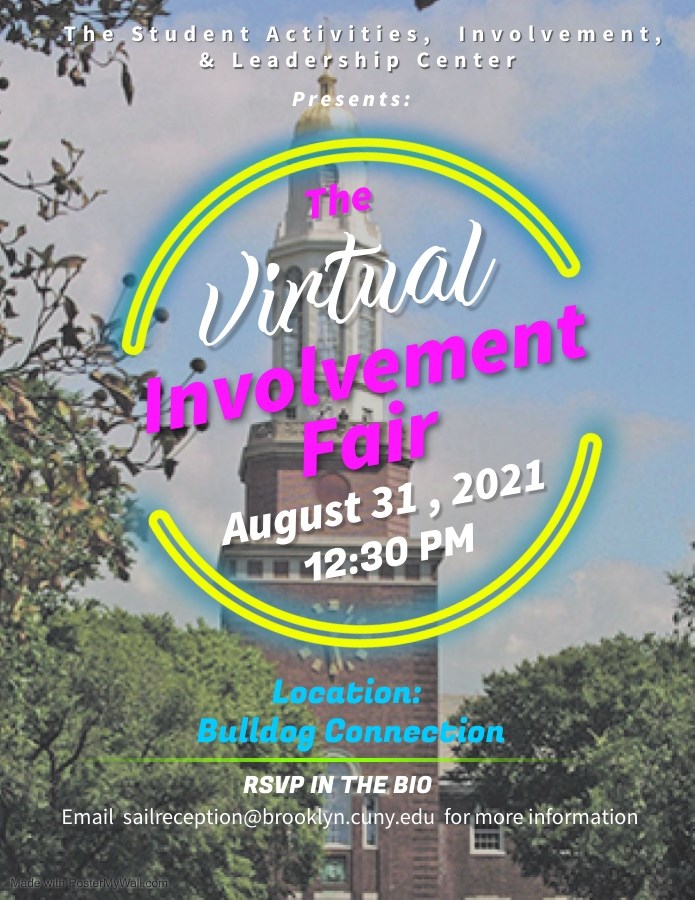 Many Brooklyn College clubs introduced themselves to students remotely at the BC Virtual Involvement Fair on Aug. 31. Despite campus opening back up, all the clubs are still functioning remotely, but they are planning on getting back to campus as soon as possible.

Among the clubs present were Stuck In The Library, the Anthropology Club, the Computer Science Club, the Psychology Club, and many more.

Stuck In the Library, a club that publishes two magazines–one on short stories and another one on poetry–welcomes any and all CUNY students who want to get into creative writing. During COVID-19, however, the club had to change their format. Last semester, for instance, they only published one magazine, and it was uploaded on their website as opposed to before COVID when it was printed and placed on stands.

“The number of submissions wasn’t affected in that sense, but we had to reduce what we published,” Mariyah Rajshahiwala, the club’s president, told The Vanguard.

Because of COVID-restrictions, Stuck In the Library was unable to host publication events nor attend other campus events, which all of the members miss dearly. “It was a great time to see the magazine for the first time straight off the printer and celebrating what we got done that semester,” added Rajshahiwala.

“I have fun memories of when we had physical fairs in the Quad, and it was always a lot of people there,” said Roksana Jasiewicz, the club’s content editor. “It was a great experience for the club just to get together physically on campus with posters, and we had a big turnout at the physical fair.”

On that same note, Samia Ahmed, the Anthropology Club’s vice president, also expressed how challenging it was to function remotely and without in-person events and meetings. Nonetheless, Ahmed was pleased with the virtual fair’s turnout.

“I would say it’s a bit more difficult than when we were in person, but regardless many students came by today to visit and talk,” said Ahmed, who thinks students were more motivated to come this year compared to last year. “I think in general people were not ready to get involved with clubs. I feel like they were hesitant last year, it was overwhelming with work and also COVID. We were all learning what’s happening, so they didn’t feel motivated to go to clubs. But people are more prepared or ecstatic to be more involved now.”

For the Anthropology Club, like many others, this marks their second year participating in the Virtual Involvement Fair so they had time to prepare, get used to the format, and learn how to communicate effectively. “We realized how the presentation works, keeping it short and simple,” added Ahmed.

The Anthropology Club has a WhatsApp group chat to connect with its members, which according to Ahmed, is very easy to use when the club operates remotely.

Similarly, for the Computer Club, the Discord chat was very helpful to reach out to others.

“We have a very active Discord online, and basically even before we went to quarantine, it was the main way to communicate with members, so promotion and stuff like that would happen through Discord as it does now,” said Anastasia Gusenkov, the secretary of the club.

Even in summer, when the club wasn’t very active, Discord was the best way to communicate and recruit new members, some of which are just starting at Brooklyn College and have not been able to visit the campus yet.

Even though the club is trying to come up with ideas of how to keep members active, a lot of the students are still feeling the lack of in-person communication. Oleksandra, the club connector, said that her crew had a Hackathon, an event that was planned fully online, and it was there that this disconnect became especially evident.

“Although it was a very exciting event, I feel like many of us still lack this presence,” said Oleksandra. “We are doing well, but we are struggling a little bit, because it’s always better to meet with the community in person. We are hoping that the situation will resolve, maybe in spring.”

Adriana Rodriguez, the president of the Psychology Club, also felt both the challenge of trying to connect with all the club members during the pandemic, as well as reaching new people.

“Trying to get people connected and joining our meetings was a little tougher…we didn’t know how to advertise it as much, because usually in Quad it’s like, ‘Join, join, join.’And they will come, but in virtual, we’d have to find ways to promote it in advance, promote it every hour, something like that,” said Rodriguez.

Since last year, however, Rodriguez is now confident in the club’s ability to attract more people to join.

“It was harder, but it’s getting much easier now, and I’m learning more and more every day,” added Rodriguez. “Me and my e-board were talking about it a week in advance, about how to promote it, and how to do it, and step by step how to continue it so this semester, it was much easier…we saw so many faces today.”

Web Group is a group @ Brooklyn College
View all posts by webgroup →
← Newer Post
BC Reacts: Cuomo’s Resignation
Older Post →
BC Students on Returning to Campus