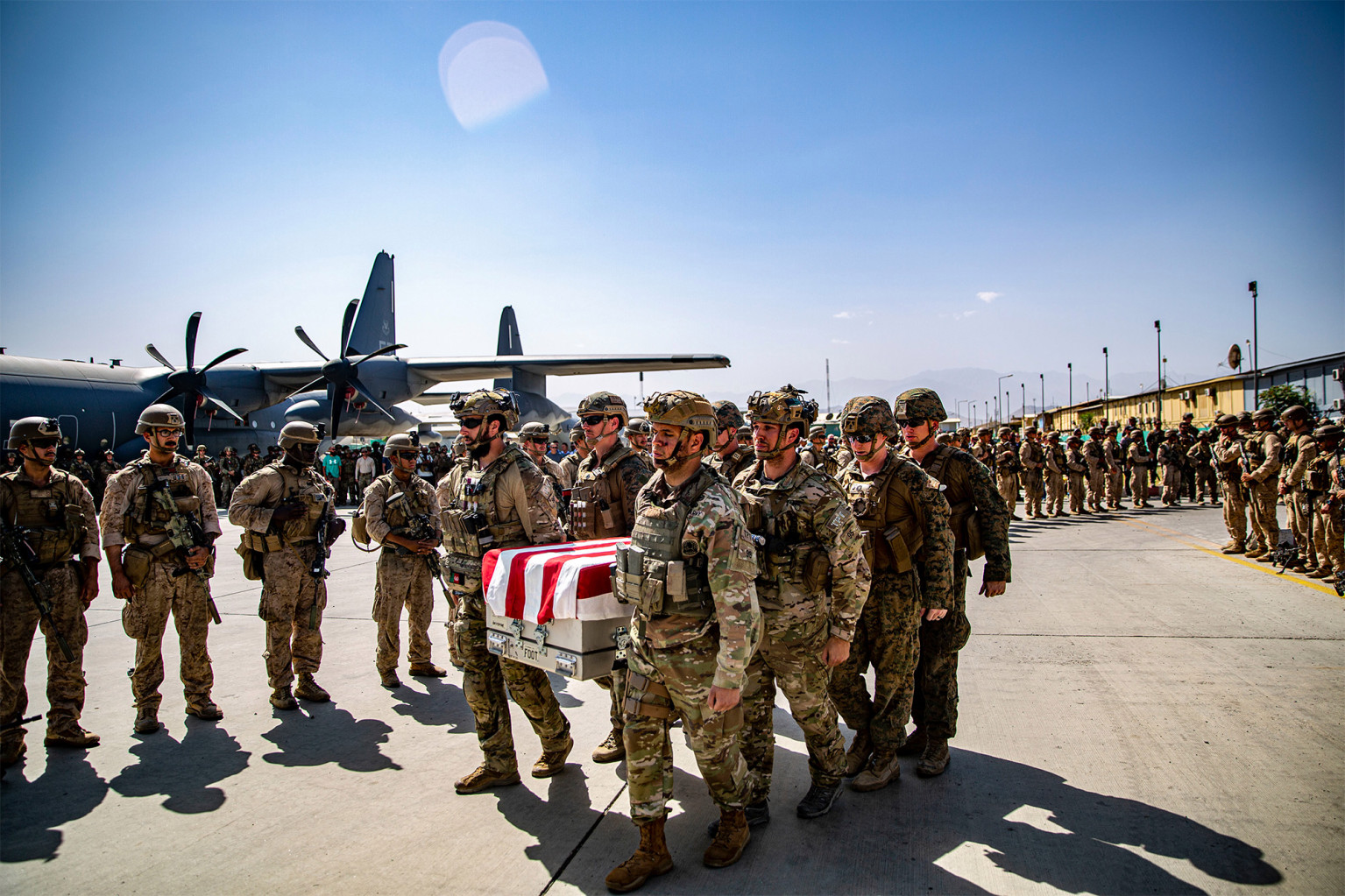 US service members carrying the casket of a soldier killed in the terrorist attack on Hamid Karzai International Airport./
U.S. Marines via ZUMA Press Wire Ser

With American troops having finally withdrawn from Afghanistan on Aug. 31, the 20-year-long war has come to an end. But in the process, thousands of Americans, Afghan allies and citizens, scrambled to evacuate the nation as the militant Taliban rapidly seized control over Afghanistan’s major cities. For many at CUNY and across the world, the withdrawal, and violence that surged, became a clear humanitarian crisis.

“The scenes unfolding in Afghanistan are heartbreaking to watch,” tweeted CUNY Chancellor Felix Matos on Aug. 16, a day after Afghan President Ashraf Ghani fled the country as the Taliban took over the capital city of Kabul. “CUNY remains committed to supporting our Afghan students, staff, and faculty who make up a vital part of our diverse community. Our thoughts are with them and their loved ones in the difficult time that lies ahead.”

Though it was no surprise to many CUNY professors that the Taliban would seize control over Afghanistan, the pace at which they did, over the course of 10 days, was unexpected.

“What is frightening and unprecedented is the speed with which the Taliban took over,” said College of Staten Island Professor Saadia Toor.

Talks between the US and Taliban on America’s withdrawal began back in late 2018, according to The New York Times. Though the Taliban has made promises of reforming its rhetoric that previously oppressed women and minorities, many at CUNY are doubtful that they will see their word through. When it first began controlling Afghanistan in 1994, the Taliban were very much like the terrorist group ISIS, Brooklyn College Professor Dena Motevalian told The Vanguard.

​    “They claim that they are bringing pure Islam from 1400 years ago, which is a very wrong interpretation of Islam and how it was presented,” Motevalian said. Having worked with Afghan and Iranian refugees as a case manager, Motevalian heard of the Taliban’s attacks on Afghan citizens and allies who had affiliations with the US. In one case, a woman came to her after her father, who was a translator for American troops, was killed with a hammer by the Taliban in his own home.

“It just demonstrates how the Taliban brings violence to the streets and to its people. So it is very frightening,” said the BC professor. “It’s very understandable that everyone wants to evacuate and whoever can, and has the resources, wants to evacuate the country.”

The Biden administration’s evacuation plans faced much scrutiny, as it was not guaranteed that Afghan allies who aided American troops would be evacuated.

“The least that the US should have done was to have a plan and a will to evacuate the people who work with it,” Professor Toor said.

As of press time, over 114,000 people have been evacuated through the combined efforts of the United States and allying nations. However, with reports of some American planes leaving half-empty and Afghan refugees falling to their deaths after clinging to departing planes, many thought that Biden could have done more ahead of time.

“I really have to lay the blame at the feet of the administration. I think there was time to prepare and there was such a failure to do so,” Professor Felipe De La Hoz from the Newmark Graduate School of Journalism told The Vanguard.

When evacuations first began on Aug. 14, the United States was not paroling Afghan allies and citizens, which would have streamlined the process of leaving Afghanistan as quickly as possible, De La Hoz explained. It wasn’t until Aug. 26, a little less than a week before US troops withdrew, that President Biden implemented humanitarian parole.

“I think it’s good that they opened it up, but it might ultimately be a little bit too little too late,” De La Hoz said, noting that each application also costs $500 per applicant. Aside from parole, Biden also created Program Priority 2 Designation (P-2 Program) for those who were in danger for their US affiliation but did not qualify for a Special Immigrant Visa. However, there was no consular staff available for applicants to have their forms processed, De La Hoz said.

“It’s not really clear that these steps are really going to be helpful in this kind of space. The time things should have been done would’ve been months ago,” he said.

As many Afghan refugees were resettled into neighboring nations like Qatar, their future and that of Afghanistan remains unclear. In the coming months, refugees looking to permanently settle in the United States are likely to undergo a lengthy waiting game, while those who remained in Afghanistan will continue living under Taliban rule. Though the US’s withdrawal from Afghanistan stirred much controversy, violence, and trauma, Professor Motevalian noted that it is important to focus on Afghanistan’s situation beyond whether it was right or wrong for America to leave.

“I think we shouldn’t look at whether America’s withdrawal was a good idea or a bad idea. I think the beginning was problematic and we should have been waiting for this,” said Motevalian. “It was predictable.”