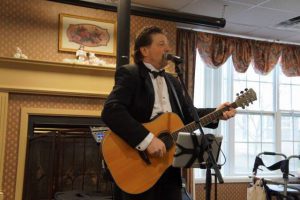 There’s a mural on the side of a well-known music venue in Buffalo that reads “Without music, life would be a mistake.” It’s a quote from Friedrich Nietzsche, and it dutifully reminds everyone walking from east to west down Allen Street of how dull and fruitless our lives might be without a little music in it.

Historically, music has always played a large role in attempting to heal the world, however free-spirited or optimistic it may have seemed — the late 80s were full of it: “We Are The World,” Live Aid — music, and the stars it involved, was a smashing success in terms of grabbing the world’s attention and requesting help. Things look a little different now.

It doesn’t include everyone, and maybe I just don’t know what’s going on behind the scenes, but I don’t see as many high-profile artists lending their hands to the cause. Perhaps they’re too far disconnected from what reality looks like for most of us, or the wealth deludes them into thinking all is fine so long as they never look beneath the surface. Maybe some of them are just plain selfish. What I usually see is local people — ordinary if you will — dedicating their time, energy, and money into the community around them.

Take, for example, Buffalo-based musician Tom Bender. For the last several years, he’s been packing up his guitars and equipment and heading to nursing homes around the Western New York area, where he plays live concerts for the residents.

“It’s like any other job to me at times and I don’t want to leave home to go to work either,” Bender said of his work, “and then by the time I’m done with that show my attitude’s totally changed […] The appreciation is incredible.”

It’s making a visible difference in the lives of seniors. At one performance, Bender recalls, a resident stood standing, clapping and singing along to the music. His daughter approached Bender after the show to tell him that her father hadn’t spoken, or hardly moved, in almost three months — it was the music that broke the spell and brought him to his feet.

Now that COVID-19 has barred visitors from entering nursing home facilities, Bender has simply changed tactics, and has begun setting up livestream shows to be shown to residents on projectors or tablets.

“I have a 94-year-old mother and I haven’t seen her during this whole thing,” Bender said, “so I understand what’s going on, and it hits close to home.”

For many of us, it’s the uncertainty of the near future that’s driving us crazy. We know that this won’t last forever — it has to break at some point — but it’s impossible for experts to give us any set date for when this long nightmare will be finished. The nature of viruses is that they are, if nothing else, unpredictable, and they certainly don’t adhere to any calendar schedules. The bottom line is: there will be an end to all this, we just don’t know when.

And for anyone who has lost work or perhaps their entire job, this uncertainty can mean the difference between fed and hungry children, or can determine whether the rent gets paid on time. Musicians, often notorious for going with the flow, are now caught smack in the middle of a situation that has left them with no income and no solid support system.

Yet, ever the hopeful fool, I’m still convinced that music is going to carry a whole lot of people through this mess, and it appears I’m not entirely alone. My county executive, Mark Poloncarz, has taken to recording YouTube videos of his guitar playing in between crisis managing the city of Buffalo and informing the public. Last week, he uploaded a brilliant cover of “Iris,” a hit, late 90s track from Buffalo’s own Goo Goo Dolls. I didn’t even know he played an instrument, and here he is, serenading his fellow residents and attempting to bring just a little happiness into people’s lives despite grim surroundings. It’s working.

For Tom Bender, bringing that happiness to seniors is worth every moment of practice and planning.

“The response from them [the residents] is incredible because they appreciate so much what you’re doing for them,” Bender said. “I’ve performed in front of 15,000 people before and it doesn’t even compare to having one person say, with tears in their eyes, what it meant to them for you to come there and sing for them.”

Perhaps, as David Bowie said, we can be heroes just for one day.