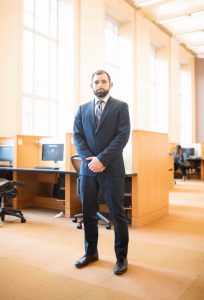 There are three candidates in the running to take over as Undergraduate Student Government (USG) President in the fall. One of them is junior and current University Student Senate (USS) delegate Ethan Milich.

Milich, 26, was born in upstate New York and has bounced around for much of his life, spending most of his childhood in Florida. At 17, Milich enlisted in the United States Marine Corps to satisfy what he calls a “deep rooted belief in service.” Milich reached the rank of Sergeant in the Marines and was deployed overseas twice as part of the Marine Fighter Attack Squadron 232, the oldest and most decorated fighter squadron in the Marine Corps.

“It changed my life,” said Milich. “You are there to serve the person to the left or right of you, that’s the heart of that, you are there for them.”

Milich says he took that understanding into his civilian life, and that he sees those he serves in student government as those to his left or right.

After his service ended, he lived with his brother and went to school at Valencia College in Orlando, Florida, before making the trip up to New York. Here, he moved in with his sister and applied to CUNY.

“It’s the most affordable and it represents everything I believe in,” he said. During his first year in New York, Milich bounced around various living arrangements, sub-leasing spaces and struggling with housing insecurity.

“I do definitely know the feeling of housing insecurity and trying to find where I am going to sleep at night,” he said.

While at Brooklyn College, Milich decided student government would be a positive way to continue serving those around him. In fall of 2017, he joined what was then CLAS as a member of the assembly. In the spring, he became Deputy Speaker of the Assembly, and then ran for the position with Alyssa Taylor, who would later tap Milich as her VP, as the speaker candidate. He served as speaker for another year.

Last spring, after a turbulent election season, Milich was runner up for the USS seat, and he and Taylor were runners up for the USG executive. In both cases, the initial victors were disqualified, and both the USS delegate seat and USG Vice President position fell to Milich. After just a short time as VP, Milich resigned. He described the situation surrounding last year’s election and the events that led to his taking the position as “toxic and very disturbing,” and that it made him want to move away from USG and get some space. Overall,  didn’t feel motivated to continue, although he maintained his seat in USS.

Second, he wants to make student government more accessible and inclusive for the wider student body. He intends to make USG representative of the make-up of Brooklyn College, specifically promising to make the executive branch at least 50 percent women. So far, the only announced member of his campaign is his running mate Samuel Ganthier, a member of the Black and Latino Male Initiative, as well as the VP of the Black History Month Committee.

“He has experience as a leader,” said Milich, “He’s engaged, and he is committed to taking on this leadership role and  doing the best he can to serve.”

The third pillar is to foster student empowerment by organizing events and programming for students, including a large concert at the beginning of the year.

“Community inspires empowerment,” Milich said. He also wants to push for forum-like town halls for students to discuss concerns and issues on campus.

The fourth pillar is a larger issue, shared with many CUNY activists: a free and fully funded CUNY.

“I really want to encourage students to jump in on that fight,” he said.

Milich cites a “myriad” of reasons as to why he is the best candidate for USG President, including his experience in Brooklyn’s Student Government, which is more than either of his opponents combined.

“I truly have what is best for students in my heart,” he said.