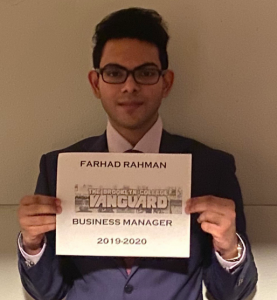 I would like to start off by first thanking all essential workers. Including each individual healthcare worker, medical staff in general, and the workers providing food and basic necessities to everyone. And a special thanks to Brooklyn College’s essential staff including security guards who still show up to campus despite its current closure and professors and advisors adjusting to the current circumstances courtesy of COVID-19.

I also would like to say that I hope every student, professor and all other faculty of Brooklyn College are adapting to this quarantine situation.

Before I begin saying goodbye, I would like to introduce the time I’ve spent here at Brooklyn College. I’ve been on this campus since I was a junior high school student at Brooklyn College Academy — about six years ago now — but even when all my friends from high school left for other colleges and universities across the globe, I stuck with the poor man’s Harvard. It wasn’t the scenic atmosphere of walking through the quad every day, seeing the freshly shaved emerald grass and cherry blossom tree every spring, or the magnificent library bell tower, which was even more breathtaking on the inside. But because I felt like I was welcome. After highschool, I wasn’t sure where to go. My parents told me to join my brother at Hunter even when I didn’t want to. But when they denied my application, I had nowhere to go until Brooklyn College sent me a ticket into their school in the form of a mistaken envelope in the mail followed by a phone call.

I’ve never regretted being here. My opinions were heard, respected, and appreciated. I managed to make a lot of friends and formed relationships that I’m sure I’ll carry for a long time, including the one with the girl of my dreams, Winypher.

I founded the Fencing Club with a close friend that I made here as well, and the moments we shared in it were unforgettable. I became friends with some of my professors, who would occasionally give me advice, check in on me and my family, and make me feel like I’m never alone.

When I read that the Kingsman was looking for a replacement business manager for my predecessor, Noah Daly, I debated joining the team. I had read every issue since I picked up my first one during my first semester as a college student, and I always wanted to write or contribute to the student voice on campus without being political. After I was told that I got the position, I was overwhelmed with joy. I was told that I had some big shoes to fill, and I knew I could never truly be a replacement to Daly, but rather, a placeholder. My biggest responsibility was ensuring a steady transition of financing our newly combined, large newspaper club which formed from The Kingsman and Excelsior.

The team was the best I could ever have asked for. The Editor-in-Chief, Quiara Vasquez, was funny, witty, outgoing, but surprisingly relatable and down to earth. Managing Editor Ryan Schwach possessed every quality of a leader you could ever imagine, but was always more of a friend when you needed him to be. Our editors all had their own unique personality, but two things they all had in common were that they were amiable and humorous.

I worked on only a couple of stories during my time as the business manager of the Vanguard, but I wished I had worked on many more. It turned out to be a fun and thrilling experience that I look back on with pride, but nothing makes me more proud than seeing our entire team flourish, despite every hardship thrown our way.

If there’s one thing I learned from being a student here at Brooklyn College–I can say it certainly isn’t advanced statistics–it’s that opportunity isn’t something that falls in your lap, it’s something you make for yourself.

If there’s one thing I learned about life, it’s that life has no meaning on its own. Which is why you have to make it meaningful.

Farewell Vanguard, Brooklyn College, professors and staff. A special farewell to COVID-19, soon, hopefully–you will not be missed. I wish everyone good luck and good health for all their many years to come. Here’s to the next Vanguard staff.