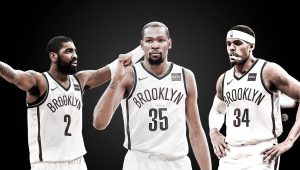 When the NBA season was suspended on Mar. 11, 2020, the Brooklyn Nets were in a rather precarious position, and it seems that as the league restarts, their situation hasn’t become much better.

The team was in the 7th spot in the Eastern Conference, set to go up against one of the best teams in the league if the playoffs started that day. During hiatus, there was growing optimism among Nets fans that both Kevin Durant and Kyrie Irving could return if and once the season resumed.

However, despite the NBA announcing the season would resume on July 30, both Durant and Irving have firmly stated they would not play this season. Speaking to The Undefeated, Durant expressed, “My season is over. I’m not playing at all.” With fans’ hopes dashed and star players out of the game, the Nets situation has only worsened.

The team’s roster has only continued dwindling. Rotation players Spencer Dinwiddie and Taurean Prince are sitting out the Orlando restart after testing positive for COVID,while Wilson Chandler has completely opted out of returning, citing family concerns. The Nets have gone from a fringe-star-laden team, to a team most aren’t sure has enough players to suit up.

But the Nets are a strong organization and pivoted without complaint. The team signed some players who may be looking at their last chance in the league. Take Jamal Crawford as a prime example.

Crawford is 40 years old, and has played for nine teams in his career. He is what he is, a crafty, quick 6th man, who struggles on defense and often needs the ball in his hands to be effective. But Crawford scored 51 points in a game for the Suns last year, and though he is undoubtedly in the twilight of his career, he still may have some juice left.

This is the position the Nets are in right now. Their stars are out, much of their rotation is amiss, and they have nothing to lose. So the plan will probably be as it should be: roll with the young guys, see what some of the vets can give you, and start planning for what comes next.

Kevin Durant and Kyrie Irving should be back for the start of next year. Caris LeVert looks set to stay with them, along with other high-quality players in Jarrett Allen, Spencer Dinwiddie, DeAndre Jordan, and Joe Harris (who they need to resign). If all healthy, the Nets should be one of the most feared teams in the league next year.

There are a lot of questions for Brooklyn’s basketball team. Questions that, on, say the Knicks, or the Bulls, or some other poorly-run franchise, would signal danger and failure on the horizon. But Sean Marks and his top brass have shown the ability to set a culture in Brooklyn of accountability, transparency, and innovative thinking.

Ultimately, it will be exciting to watch the Nets play in Orlando. But the franchise’s destiny is not written just now. That comes next summer.