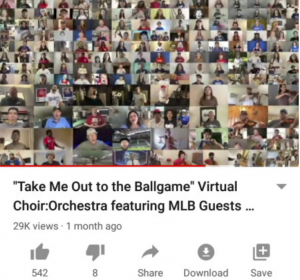 “Take Me Out to the Ballgame” virtual choir video was posted to Harrison’s YouTube channel and has gained about
30,000 views./ YouTube/Harrison Sheckler’s channel

Harrison Sheckler, a Brooklyn College student pursuing a Masters in Piano Performance, started the Major League Baseball season off on the right note this past summer, with a virtual choir performance of “Take Me Out to the Ballgame” featuring numerous baseball players, fans, and musicians.

“I love to collaborate with fellow musicians and artists,” said Sheckler. “My two passions are baseball and music and to have an opportunity to combine those two is a dream come true.”

The video was released just in time for Major League Baseball’s Opening Day on July 23, after the season had been delayed due to the COVID-19 pandemic.

“Because we will have to cheer on our favorite baseball teams from the safety of our own homes this season, I wanted to create a fun and engaging video to help bring fans closer to the game,” Sheckler said. “And what better way than to sing the 7th inning classic ‘Take Me Out to the Ballgame’?!”

The project began when Sheckler contacted former MLB pitcher Bronson Arroyo, who is also a musician and the namesake of his own band, with the idea. According to Sheckler, Arroyo “loved the idea” and was “instrumental” in recruiting many of the baseball players involved.

“Bronson Arroyo is amazing. He has an amazing resume and is extremely humble and gracious with his time,” Sheckler said. “Unfortunately, I wasn’t able to work with him in-person on this project…but I am very thankful to my audio engineers Armin Meyer and Grant Bayer who ran the studio session in Cincinnati with Bronson and Fox Sports Reds’ announcer Jim Day to record their audio for the video.”

Among the many players that can be spotted in the video are Bret Saberhagen, Scooter Gennett, Jeff Frye, Jonny Gomes, and Ryan Dempster, who opens the video impersonating and cosplaying as Harry Caray, a famous baseball sportscaster. The performance also features ESPN baseball columnist, Jeff Passan, and former MLB umpire, Dale Scott.

The video continues with Bronson Arroyo leading the singing and Sheckler leading on piano. The rest of the players, fans, and musicians rotate in and out of the video as the song progresses. By the end, the video shows everyone who participated in the project.

Since its release, the performance has been met with high praise and has gone on to amass over 30,000 views on YouTube.

“The video has been received positively by fans and music lovers all across the country,” Sheckler said. “The MLB guests involved are also extremely excited about how it turned out and have been sharing it on their social media pages which is exciting!”

Prior to this project, Sheckler was responsible for a virtual choir performance of “You’ll Never Walk Alone” from Rodger and Hammerstein’s Carousel. The video not only featured 300 singers from fifteen countries but amassed over 1 million views and gained a significant amount of attention worldwide.

Going forward, Sheckler is eager to continue piano lessons with Professor Jeffrey Biegel at Brooklyn College and see what the fall semester has in store.

“I love to perform and hope to continue performing online and in-person for audiences of all ages,” Sheckler said. “It’s just a matter of time before my next big musical idea…”

← Newer Post
Magner Center Hosts Digital Media and Arts Career Fair
Older Post →
A Blast from the Past: BC Circa 1967