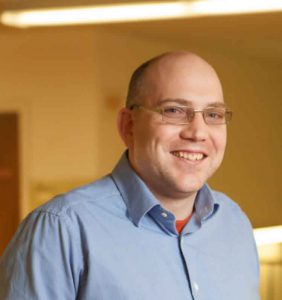 For the next four years, Brooklyn College Chemistry Professor Ryan P. Murelli and his lab will receive $1.54 million from the National Institute of Health (NIH) to carry out their novel studies on molecules called tropolones.

Though many organic chemists know of tropolones and their biological activity, developing them as therapeutics has been tough partly because they are challenging to make. But through the efforts of Murelli and his team, tropolones can be made more easily and effectively.

“Our research group is primarily a synthetic organic chemistry lab. So basically we study chemical reactions and then try to use those reactions to make valuable chemicals from something less valuable,” said Murelli. “We’re expanding the synthetic chemist tool belt, almost like architects or engineers. Instead of building buildings, we’re building molecules.”

Before Murelli’s research began at BC, knowledge on tropolone biological activity came mostly from tropolones found in nature. For instance, one natural product called β-thujaplicinol contained an α-hydroxytropolone, which inhibited an HIV enzymatic function known as Reverse Transcriptase Ribonuclease H that made it potentially valuable as a novel anti-HIV drug. This possibility led Murelli to take notice of the molecules.

“I grew up in the 80s when an HIV diagnosis was basically a death sentence. It wasn’t until maybe the mid-90s that other drugs started coming and people could start getting combination therapies – and HIV really became something that was manageable,” said Murelli. “So the idea of being able to contribute to the potential of an alternative drug for HIV was something that I thought would be really cool, and ultimately made me aware of α-hydroxytropolones.”

However, the significant problem with β-thujaplicinol was that it was too toxic to be a good HIV treatment drug. While there are very few natural product tropolones, there is an infinite number of synthetic ones in a lab. Some synthetic tropolones may go well against desired targets, which might lead to fewer side effects once they are developed into therapeutics. By expanding the chemistry behind these synthetic tropolones, Murelli and his lab create the blueprints for new and better versions of the molecules.

“The goal is always getting our compounds to treat diseases at a very low concentration; basically, the less that you need to treat it, the better because that will decrease side effects,” said BC chemistry adjunct lecturer and doctoral student Alex Berkowitz, who is carrying out his PhD studies in the Murelli lab.

Funds from the NIH will help expand new synthetic methods to make tropolones, some of which were discovered by Murelli’s students. In one of his lab tests, for instance, Berkowitz made a serendipitous discovery by exposing one compound he made to the air. This exposure converted the chemical substance directly to a tropolone he was interested in creating, making the process shorter than he anticipated. Berkowitz’s unexpected finding was never discussed before in tropolone synthesis literature.

“It’s important that we develop different methods for making them [tropolones] and introduce different functionalities to them because they’re unpredictable. We don’t always know which specific addition is going to increase its potential as a drug, or its effectiveness as a drug,” said Berkowitz.

Murelli’s interest in therapeutic tropolones initially began with HIV, but over time broadened to many other diseases, including hepatitis B virus, herpes simplex virus, and Cryptococcus neoformans, a deadly fungal pathogen that leads to meningitis. These studies are enabled by a vast network of collaborators like BC Chemistry Professor and computational molecular biophysics expert Emilio Gallicchio.

Gallicchio aids Murelli’s lab by creating computer simulations of how tropolones might interact with different targets. Combining technology with chemistry allows the researchers to make predictions about how these molecules will react against a specific disease or help explain their results. As discovered early on, however, the use of computer modeling has its limitations.

“It’s enormously challenging to use computers to predict how things are going to behave in a cell,” said Murelli. “It’s main value currently is to provide us with added information to try to explain trends we have already seen at a molecular level. If we ever do get to a point where it can be predictive, then it could be a complete game-changer for our drug-development efforts.”

The NIH grant will help to continue advancing these computational methods with Gallicchio and Stuart Le Grice, a key collaborator from the National Cancer Institute. Le Grice’s lab found that many of Murelli’s synthetic tropolones have activity against Kaposi’s sarcoma-associated herpesvirus, a cancer-causing virus common in untreated HIV-infected individuals. Computer modeling will help optimize molecules against this virus.

Often the challenges that arise from optimizing molecules for diseases are the mistakes committed in lab work. Whether it be a mathematical error or, in Berkowitz’s case, accidentally exposing a chemical to air, these flaws in research are inherent and useful. Serendipity in Murelli’s lab has built a substantial amount of knowledge on the nature of tropolones. However, with the nearly five-month closure of CUNY campuses, Murelli and his research team faced a new obstacle – learning to continue their studies remotely, without access to necessary equipment.

For Nana Agyemang, a third-year BC doctoral student, the pandemic halted his studies’ advancement to the next facet of investigation – animal testing. The Murelli lab’s collaborators at St. Louis University School of Medicine discovered a new class of molecules Agyemang had made that warranted studies in an animal model. To carry out those studies, they needed large amounts of the compound. Agyemang was in the process of fulfilling the task when CUNY closed in March.

“While we were making these molecules, when we heard about this pandemic, we had to literally stop what we were doing and stay home; which was safe for us, but for the work, we don’t know now where we stand with the animal testing,” said Agyemang, who spoke to the Vanguard from City College’s reopened laboratory. “It takes years, data, and research, for anything to become a drug (…) I hope that someday, sometime, somebody will pick up a bottle of a tropolone drug that we helped give fundamental data to.”

Despite the setbacks brought upon Murelli’s research, he and his team continue their studies to aid their fellow scientists with drug development. In doing so, the lab contributes to the scientific community’s cumulative effort to expand knowledge and literature for future solutions.

“It’s always useful to be able to discover something new and expand upon that because we’re allowing the rest of the scientific community to learn that as well when we publish our reports,” said Lauren Bejcek, a fifth-year doctoral student at the CUNY Graduate Center. “The more information that’s out there that people can read and learn about, the more problems we’ll be able to solve collectively.”