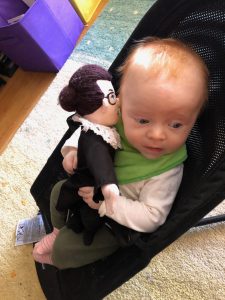 New generations have begun to grow up with RBG as a cultural icon./ James Monohan

Last night, on Erev Rosh Hashanah, it was announced Ruth Bader Ginsburg died. She died at the start of the Jewish New Year, which is supposed to be a time of celebration, marked by apples and honey. “To a sweet New Year,” people say. Well, this year is not starting that way.

As a Brooklyn College student, this loss hits a little close to home. She was from Flatbush, and her family went to the East Midwood Jewish Center on Ocean Avenue.

We knew that she had battled cancer for some time. It was suggested that she step down from the court so that President Obama could select her replacement. She scoffed at that idea. It wasn’t who she was — she was a fighter.
She was a titan in the legal world and the second woman ever to sit on the American Supreme Court, but unfortunately, we cannot just mourn the loss of an American hero like her. There are profound political implications ahead.

As we mourn, the political wheels are spinning in high gear, with a Senate confirmation hearing on the horizon. Never has a Supreme Court Justice died so close to the U.S. presidential election.

Before she died, President Trump had already announced his list of possible replacements and encouraged Biden to do the same. I didn’t think about that too much at the time.

Senate Majority leader, Mitch McConnell, who is known by the left as “Moscow Mitch,” has stated that he will confirm Ginsburg’s replacement to the Supreme Court as swiftly as possible. There is understandable outrage from Democrats who were denied by McConnell in 2016, when he pushed even holding confirmation hearings for President Obama’s replacement pick for the Supreme Court. He said the election should decide which president was to select the replacement. However, this time that logic doesn’t hold for him. This would give the President an opportunity to name three justices on the Supreme Court, which is something that no President has done before.

There is no longer a filibuster to block that. It is now a simple majority. Even if there was a tie, Vice President Mike Pence can break that to Trump’s favor.

If there is another conservative Supreme Court Justice, especially a Fox News Opinion Supreme Court Judge, there is a good possibility that many rights of Americans will be in jeopardy. The elephant in the room is abortion and reproductive rights.

Roe v. Wade (1973) has been a divisive issue in American politics for decades. Donald Trump has strong support from Christian Evangelicals, predicated on a faustian bargain that Trump will fill the courts with conservative judges that will lead to the end of abortions in the United States.

Could Trump lose the Evangelical vote with four conversative judges on the bench? Donald Trump’s words and actions often seem contrary to Christians beliefs. Does Donald Trump have anything else to offer them?

Wouldn’t it be to Trump’s advantage to tell his base that four more years would equate to the end of Roe v. Wade?  Would they call his bluff, if he lost? Do they expect him to push a nomination through before he leaves office? Would having a delayed nomination be a rallying cry for the Democrats to come out and vote before it’s too late?  Might it make their vote seem more impactful? If the Court is republican, we need a democratic president.
A buddy of mine worked hard on the Bernie Sanders campaign, but won’t vote in the 2020 election because they believe there will be no difference, no matter who wins the election. Last week you could argue that the presidential election vote might shape the Supreme Court for the next 20 years. Now it might not. The sense of doom could also be a reason to stay home in November.

The Electoral College system in the United States coupled with inexplicable voting apathy make these questions of who comes out to vote in swing states terribly important. A national election would not hold as much sway to esoteric groups in specific regions of the country.

It’s not hard to believe that whatever happens will give more gas to the protests. We are familiar with the formula by now. We know that the president will add fire to the flames and tell his base that it’s Biden’s fault. That message will be amplified through social media and conservative outlets. Comedy shows which tend liberal will poke fun at and empathize with outrage on the left. It’s exhausting and ultimately accomplishes nothing.
Ruth Bader Ginsburg represented more than just a liberal legal hero — she was the status quo for both sides of the aisle. Upon that break, people will fight for power. It’s not pretty because it is not meant to be. There is little that we say or do individually that will make much of a difference, but voting in strong numbers always has. Let’s not forget that.

← Newer Post
Yanks Look to Overcome a Season of Ups and Downs
Older Post →
Op-Ed: What Brooklyn College Stole From Us