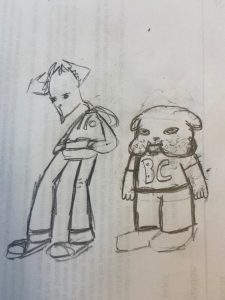 Theatre majors Gabrielle Toro Vivoni and Mo Muhsin are the Vanguard’s comic strip artists and creators of “Vinny the Goat.” Through characters Vinny, Buster, and Jenna, the four-panel weekly cartoon series depicts the duo’s moments on campus that embody the Brooklyn College and CUNY student experience.

“The characters of Vinny have become a lot more well-rounded individuals. Initially, Vinny was a typical clean slate character meant to represent any college student, while Buster and Jenna were interchangeable to any story,” said Muhsin. Over time, the artists found that storylines became easier to create once they got more familiar with these characters and what they envisioned.

Their comic making process first begins with brainstorming an idea that can be done within the four panels. Then they sketch and develop the strip’s running joke by bouncing ideas off of each other. The duo managed to develop a closer relationship by comic creating and bringing the characters to life. Although they were hesitant at first to combine their professional and personal relationship, Vivoni and Muhsin felt stronger through their mutual interest in comic art.

“The biggest changes were when Gabrielle came on board we switched to digital inking, and recently we added color alongside a major redesign, giving everything bold black outlines,” said Muhsin.

“During the early 2000’s, there was this phase of thick black outlines and simple cel shading, and Rebeltaxi’s comic Loki IRL keeps that spirit alive in a time where most webcomics look the same,” said Muhsin.

The transition to remote learning and publishing the Vanguard solely online has not been a challenge for the comic strip. Since everything is digital, it leaves more room for the pair to ink and color creatively. Vivoni and Muhsin managed to work through the pandemic as they quarantined together and have been working collaboratively since. The duo is usually in the same room, but if not, they are on the phone or Facetime updating each other every step of the way. Vivoni and Muhsin also actively update the Instagram account for Vinny the Goat (@vinnythegoat_bc) so that their audience can follow beyond the Vanguard platform.

After their time at the Vanguard, each partner has in mind what their future looks like – they are both aspiring creators with hopes to improve their art skills to achieve their goals in the art world.

“All I know is I want to spend the rest of my life cooped up in a dark room drawing and get paid to do it,” said Muhsin. Muhsin says that he intends to work in creating comics or animation, but if his plans don’t work out, he would love to be a critic or writer for animation.

Vivoni mentions that her passion for comics comes from her uncle who is a pencil artist for DC and Marvel comics. She knows that she would like to continue creating comics or storyboards for cartoons.

“I’ve always known that I have wanted to share my artwork with people and make things that made people smile,” she said, “but I have always considered making little comics or even a fully blown comic series if I ever got an idea.”

The pair have managed to produce comic strips for several issues of the Vanguard and feel encouraged by all that’s in store for their strip. Together, the notorious “Mo and Gab,” are bound to create more humorous stories that perfectly sums up the Brooklyn College experience.