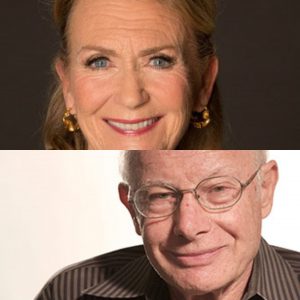 Juliet Mills, a veteran actress of stage and screen alike is best known for her work in plays Five Finger Exercise (For which she received a Tony nom), the Billy Wilder film Avanti!, the small screen production Nanny and the Professor, both of which garnered her Golden Globe noms, and her Emmy award winning role as Samantha Cady in QB VII.

She also comes from a rather talented family as well, Her father, John Mills, was a well-seasoned actor whose career spanned over seven decades, and film buffs might also know her sister, Hayley Mills, who played the original twins from the 1961 film The Parent Trap.

“I love working with [my sister],” said Mills. “We trust each other so much, so it makes it very easy to work with somebody you know so well.”

Despite spending a substantial amount of time with Walt Disney and skipping lines at Disneyland, Mills had a relatively normal childhood.

“[My parents] wanted all of us to do what made us happy and what we wanted to do,” said Mills.

Due to the COVID-19 shutdown, the meeting naturally took place over Zoom, and Hirsch took the opportunity to ask about her pandemic endeavors.

“I’ve been doing a lot of Zoom theater,” Mills said, “but it’s not a genre I really enjoy, I have to say. It’s absolutely terrifying because I find technology rather terrifying, and it’s live…things go wrong; suddenly, the screen goes blank, or you can’t be heard.”

Despite this, Mills has no plans of retiring. “I don’t want to retire. I love working; I love acting,” Mills said. “My father didn’t retire…his last performance was Gus the Theatrical Cat in a video production of Cats, which was much better than the movie, I assure you.”

While she has no desire to be a director, Mills is open to the thought of being a teacher. “I don’t really know how to go about being a teacher but that I would like to do,” Mills shared. “I really enjoy working with actors…maybe I should think about it more the way things are at the moment.”

Before leaving the meeting, Mills offered some words of advice for actors just starting in the business. “If you’re serious about being an actor,” she said, “you should start in the theater because it is the best training ground of all, there’s no question about that.”

“Television is more geared to personality, and there are lots of traps in television acting, especially sitcoms,” Mills continued. “Playing for laughs is never the best in comedy. You never play for laughs, Billy Wilder taught me that. You play for truth, and if it’s funny, that’s great.”