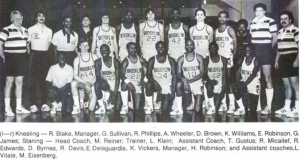 The Brooklyn College 1981-82 men’s basketball team, it was announced this past Summer, is being inducted into the BC Athletics Hall of Fame. With that team reaching the final four of the Division 3 NCAA tournament (finishing in third place), and being the only CUNY team to ever reach such a feat, it is not hyperbole to say this team is the best CUNY has ever produced.

The Vanguard was able to sit down with a member of that historic team, forward Dan Byrnes, to discuss what that team’s run meant to him, and what it means to be honored by his alma mater.

Byrnes, a Brooklynite through and through, played as a point forward for the Bulldogs, a team known for its depth and versatility. “I was a good basketball player, but not an athletic basketball player,” honestly stated Byrnes.

“I was a decent shooter, a good foul shooter, didn’t turn the ball over much, and [was] kind of like an assistant coach out there on the floor.”

The Bulldogs in 1982 defeated number one seed (and undefeated) College of Staten Island in the tournament, and were not even the second or third best team on paper in the division, with Baruch and John Jay ahead of them. But the Bulldogs were a tight-knit group, led by Head Coach Mark Reiner.

“I believe that much of my success in life, I learned from sacrificing for the better of the team, knowing what a team looks like, knowing how to coach a team…” said Byrnes. He heaped praise on his coaches and trainers and teammates for leading him and the team, and for organizing “a group of people for a single goal.”

After Brooklyn College’s success in 1982, the men’s basketball program moved into Division 1 the next season, playing teams such as Jim Calhoun’s Northeastern University and Rick Pitino’s Boston University. Byrnes, still on the team through much success and sweeping changes, was extremely happy along for the ride, learning everyday.

In the daily grind of schooling, Byrnes described Brooklyn College as many of us are all too familiar with it. Students plan their schedules around their part-time jobs, they go to class, go to work, get home, eat dinner, do their homework, and start the process all over again in the morning. He also remarked on the diversity present at BC, and how that prepared him for a life outside of school, where any opportunity could land you in a place outside of your comfort zone.

When Byrnes started his college experience at Brooklyn College in 1978, the city was experiencing major budget cuts. The campus today is clearly rebuilt, something that makes Byrnes happy that he’s gotten to see improvements from being a student to now an alumnus. And of course the game has changed too, something starkly seen on the professional level, but just as much on the college stage.

“Basketball has truly changed. Everyone’s faster, everyone’s bigger, everyone shoots further away from the basket,” stated Byrnes. The three-point line did not even come into effect until the year after the Bulldogs’ historic run.

Byrnes explained how there used to be a lot more set-up plays in the late 70’s and early 80’s, and today it’s a lot of motion offense.

In 2016, at its championship game, CUNY recognized the 1981-82 Brooklyn College men’s basketball team. They had a little VIP section, they reunited with all of their friends and former teammates, and had an overall splendid occasion. It acted as somewhat of a precursor to the yet-to-come Hall of Fame ceremony.

“If our Hall of Fame ceremony at the school is anywhere close to that, it will be a spectacular time,” declared Byrnes.

In recent years, and prompted by that 2016 reunion, Byrnes has felt extreme happiness in hearing more about his old friends’ lives today, and how successful they have become.

“My teammates are now pillars of their communities. Lifelong friendships have been created over just being on that team,” he said.

There are three main things Byrnes thinks about when reminiscing on that record-setting Bulldogs team.

It was a great deal of sacrifice (in giving up parts of their games for the betterment of the team), friendship (in the tight-knit bonds the players formed and the cohesion that produced), and hard work (even as friends, practices were always intense). Byrnes explained that the coaches used to have a saying: “Games are for show, but practices are where you win the games.”

I asked Byrnes about some life lessons he took away from his time at Brooklyn College and with the group that made it to the final four.

← Newer Post
On the Record: Bruce Springsteen, “Letter to You”
Older Post →
Black Solidarity Event Calls for Change “There Are Other Battles to be Fought”