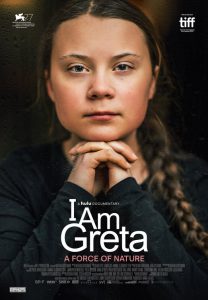 “I am Greta”, a Hulu documentary about Greta Thunberg./ Poster design by Leroy and Rose

I Am Greta dropped on Hulu on Friday, Nov. 13, 2020. It is directed by Swedish director Nathan Grossman about Swedish climate activist Greta Thunberg. The capitalized “A” adds emphasis.

As Grossman tells it, he got in on the ground floor early. He heard about a school girl who had begun protesting the globe’s climate emergency a few weeks after she had begun her endeavor. He subsequently filmed a year of Greta’s life from her early school strike at the foot of the Swedish parliament to her meteoric rise on the world stage. The apex of the film is Greta’s trip to New York City to speak at the United Nations and participate in the climate strike/march down Broadway last year, which many Brooklyn College students participated in.

As Greta symbolizes, her message about the climate emergency and any attention on her is attention on that. However, you are not going to learn much more about it here. More can be learned from her collection of speeches, No One Is Too Small to Make a Difference.

This documentary assumes that its audience is already familiar with Greta’s story. It unfolds like a behind-the-scenes music documentary made for the fans. Only bits of the concert are shown, and you see personal moments of the band along the way. Without loss of generality, we watch Greta fight with her father, cuddle with her dogs and horse, and just watch her in different settings.

Obviously, the purpose is to humanize a girl who lives in extremes. She is demonized by the dictators of the world. We see Fox News commentators insulting her in full disgust, which is how they emotionally connect with their audience. We see Donald Trump insulting her at a campaign rally. I was surprised that the audience didn’t start to chant “lock her [Greta] up.” Then we see Greta dancing around like any normal kid. This little girl got under so many of the most powerful people of the world’s collective skin. Not surprising these days, we also learn that Greta has had death threats made on her life.

On the other side of the political spectrum, we see Greta with world leaders who hypocritically praise her efforts and show themselves “being on the right side of history,” but then carry on with burning carbons in the atmosphere. The film implicitly asks the question what difference does it make if a leader of a nation praises you or demonizes you if the end result is that both do nothing to reduce the amount of carbon being put into the atmosphere.

Next, there is the contrast of Greta the “Super Star,” whom high school students all over the world want to know. Then we see Greta awkwardly trying to find a place to sit at the lunch table in her own high school. She is not cool. She looks much younger than the rest of the students her own age, and doesn’t look like she fits in at all. We all know how painful that can feel.

It is not clear if that makes much of a difference to Greta, but her work takes its toll. In the news, she is portrayed as a formidable speaker chastising world leaders, but in this film we see someone who is barely holding it together. We see her going to palaces but living out of a suitcase with Heinz baked beans in a microwave oven packed in the trunk of a small electric car. She rides around Europe with her father eating a diet of cold pasta and beans. She wears the same few outfits all the time because she wants to limit her consumption of resources.

Sometimes there is way too much footage of Greta. It feels like filler with no point. The ability to hold one’s attention seems predicated on how important you feel Greta is. The contradiction is that Greta doesn’t want to be the focal point of attention. She wants her message to be the focus.
“Our house is on fire. I am here to say, our house is on fire,” she wrote in an op-ed to The Guardian in 2019. “According to the IPCC (Intergovernmental Panel on Climate Change), we are less than 12 years away from not being able to undo our mistakes.”

The jury is still out on this documentary. Time will tell how important this film is and determine if Greta comes in and out of the world stage like the latest hip hop star, or if Greta’s movement proves to be a sustainable force.