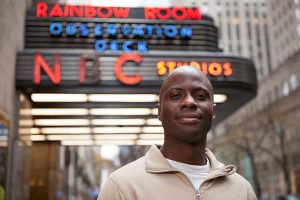 Hashmiru Sesay, a 30-year-old producing student at the Feirstein Graduate School of Cinema, had an epiphany after graduating from West Virginia University with a nursing degree and had accumulated hours of medical work under his belt. In this year’s COVID-19 pandemic, Sesay found a perfect niche for his skills as a COVID Health and Safety Manager on the set of NBC’s Saturday Night Live.

“I think the hardest part of someone’s life is deciding,‘This is what I want to do.’ I was fortunate enough to have that sort of epiphany and really realize that if I’m able to do this every day in my life, that will be a life well-lived,” said Sesay.

For Sesay, that dream was to pursue a career as a film producer. Instead of continuing with a master’s degree in public health when he moved to New York, Sesay jumped into the media landscape, taking classes in Manhattan Neighborhood Network and eventually applying to Feirstein to get his footing in the industry.

When Sesay got a call from the President at NBCUniversal, offering him a COVID Health and Safety managerial position at SNL, one of the most successful and influential shows in American history, it was the validation he needed to finally begin his chapter in film anew.

While Sesay’s position runs technical with aspects like notifying when to restock on hand sanitizer and analyzing set builds for maximum safety precaution, Sesay considers himself lucky to be learning from some of the best in the country.

“I’m able to speak with every department, everyone from the set, the carpenter, and the production designer, the producers, the writers, the cast, everyone,” he said. “And the one thing about a producer is you’re sort of the leader of the ship, and you need to understand what everybody needs to do in order to accomplish your goal of getting a film or a TV show produced.”

Starting his role in September, Sesay admitted that going to work and playing his role as an assertive safety watcher and keeper still makes him nervous. But, his past medical experience and support from his colleagues keep him focused. And while the journey to SNL was certainly unconventional, every puzzle of Sesay’s life not only perfectly fits when looking back but also becomes necessary in the road that led him to where he currently is.

Growing up in the suburbs of Stafford, Virginia, Sesay was comfortable in his decision to follow in the footsteps his mother had carved in becoming a nurse.“Growing up in Virginia, I didn’t know anyone in the entertainment industry,” Sesay recalled, “and it just made too much sense.”

Self-described as a cinephile, Sesay said he filled his free time growing up writing and creating different pieces, always seeing it as a side hobby. Even as he became commissioned as a Second lieutenant in the Army Reserve, and secured his nursing degree in West Virginia while receiving aid from the Reserve Officer Training Corps (ROTC) Scholarship, the urge to create films stayed with him.

“I always had it in the back of my head, like, ‘Oh man, it would be cool to make a movie, but the thought never went farther than that,’” he said.

The narrative changed when he picked New York as his destination for travel nursing and found a job at Mount Sinai Hospital. Some months later, Sesay spotted an ad for a media education class at the Manhattan Neighborhood Network, and the creative in him saw an opportunity to diverge from the plans that he characterized as “making too much sense.” He continued his media education on the side of his medical work, filling all his free time with editing the film he had shot videos on.

“It came to a point where I was either going to go to grad school and study public health, or I was going to go all in and do the filmmaking thing,” Sesay said.

Sesay took his passion further by applying to the Feirstein Graduate School of Cinema and doubled down a position as a production assistant in a local media company. He was working on a short film called Citizen Neuro with a fellow classmate on the director’s track and had scheduled to shoot the remaining scenes in March when the pandemic hit. Like many others, Sesay saw his job and projects spiral down the drain.

But recognizing that his past expertise in the healthcare profession could be of use, Sesay adapted.

“I just thought that it was sort of my duty to help out where I could.” Lucky for him, it was that good-willed inclination that led him to meet his current SNL supervisor, who was another medic that worked with Sesay on the set of a Facebook commercial.

“We got to talking, and she was saying how she was the set medic for Saturday Night Live for the past six seasons, and they were gearing for their 46th season and had a new position for a health and safety manager,” Sesay said.

A couple of phone calls later, Sesay found himself in a serendipitous position that leaned on his experience as a medical professional and yet opened opportunities and insights into the profession Sesay redirected his life to pursue.

“It may be very hard, but everything is possible as long as you make that decision to bring it to fruition,” Sesay said. “I’m still in that process, but I feel like this is the first chapter, maybe even the first page.”