On Thursday, Oct. 17, Marcello Di Russo, the president of the Brooklyn College Composers’ Collective, scrambled to find more seats for the large crowd gathered in the atrium of the Leonard and Claire Tow Theater. Whether standing, seated in chairs, or on the ledge of the large north-facing glass window, it didn’t matter. Audience members were met with the wildly impressive Afternoon Concert.

This second half of the Composers’ Collective concert series was in direct stylistic contrast to last week’s exhilarating concert, Mirror, a site-specific performance art-piece by Tiger West. Instead, this concert featured four scores, each written by members of the Collective. Fusing an assortment of classical influences, these composers tied their own voices and clever twists into genres which ranged from the romantic to the contemporary.

After a warm introduction by Di Russo, the show began with Piano Fantasie in D Minor, written and performed by Connor Whelan. Described as “neoclassical”, the piece was a clear blend of styles that would usually be lumped in the classical category. But I happen to be a true sucker for anything in minor key. The Fantasie was dramatic, gentle, and served to showcase the composer’s studiousness as a classical musician. Whelan’s set opened a show which was clearly not going to disappoint.

Next up was Cameron Dale’s Medley for Solo Piano, a soft-spoken mixture of the composer’s earlier compositions. With a horror vacui yet somber quality, the medley’s sparkling chord progressions were incessant without losing touch. Much more contemporary in form than Whelan’s, with some clear jazz textures, this piece recalled the film scores of Ryuichi Sakamoto, or at times the movements of Maurice Ravel. 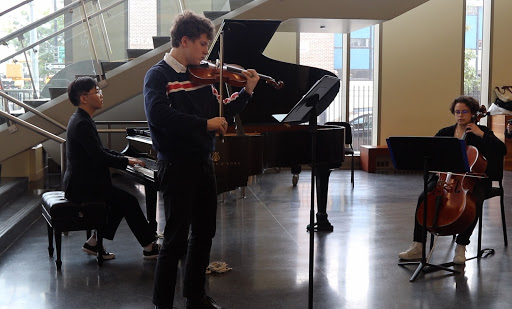 The standout piece of the show, Chose(Thing), took as its conceptual and emotional core, as well as its title, a concept by Julia Kristeva, the renowned psychoanalytic philosopher. Interpreted by Gidong Kim in his piece, Chose is explained by Kristeva as something unnamable, “a kind of archaic, preobject.” The Korean-born composer conjured feelings that were stirring, affecting and sweet; something I wanted to gobble it up, store it in me for as long as possible. Perhaps it was the deep, viscous groans sighed from the cello, played by Kaylin Romero? Or maybe Benjamin Kotik’s violin, as it sang its intense melody that rang boldly through the atrium? With Gidong grounding it all on the piano, the trio executed Chose(Thing) with emotional gusto, making it all too easy to feel swept off to somewhere unknown.

The show closed with a reminder, in piano and flute, that warmer days are yet to come. The Butterfly, written by Andrew Porter, is part of a larger collection of movements which attempts to capture the essence of spring time. Eleni Kamaratou on piano provided the bloom, and Melissa Fishman on flute the breeze, invoking the fecund months with Porter’s simplistic form and pleasant melodies.

These composers offered another thrilling assortment of concept, vision, and execution to a mundane Thursday afternoon. What was apparent in the two-part concert series is the Composers’ Collective’s eclecticism of interest, and their drive to push the arts community on campus. Whatever Di Russo and this ambitious collective have lined up is not to be missed.