This Saturday, Sept. 14, over 100 attendees and over 50 runners congregated in Brooklyn’s Marine Park to do just that at the 1st Annual Esophageal Cancer Awareness Run/Walk which was sponsored by the Salgi Esophageal Cancer Research Foundation.

When Brooklyn College alum Dara Mormile ‘03 lost her father Joseph to esophageal cancer in 2010, she realized that there was an urgent need to better educate the public and to raise money in order to combat the illness.

“I think God is shining on our cause, because it’s a glorious day today,” said State Senator Andrew Gounardes, one of several local politicians who gave remarks at the event, proudly wore number 36 as a participant.

Also present was the other state senator for Marine Park, Roxanne Persaud. She has known Mormile for over a decade due to her work at the Canarsie Courier newspaper, and had even given Mormile a Thanksgiving basket shortly after her father’s passing as a condolence.

“Dara is showing the Brooklyn way of leading the charge,” Persaud said. “She’s pulled every string to get to this point, because it’s personal.”

Mormile’s father, Joseph, had all the symptoms of esophageal cancer but Joseph, Dara, and their family doctor, had not been able to connect the dots in time.

“He had heartburn, acid flux, indigestion, trouble swallowing… he had all of that, for quite a few years,” Mormile remembered. “The doctor would just give him prescription pills, like Nexium or whatever, to treat the heartburn. But it wasn’t until the food literally couldn’t go down that they suspected it was more serious.” 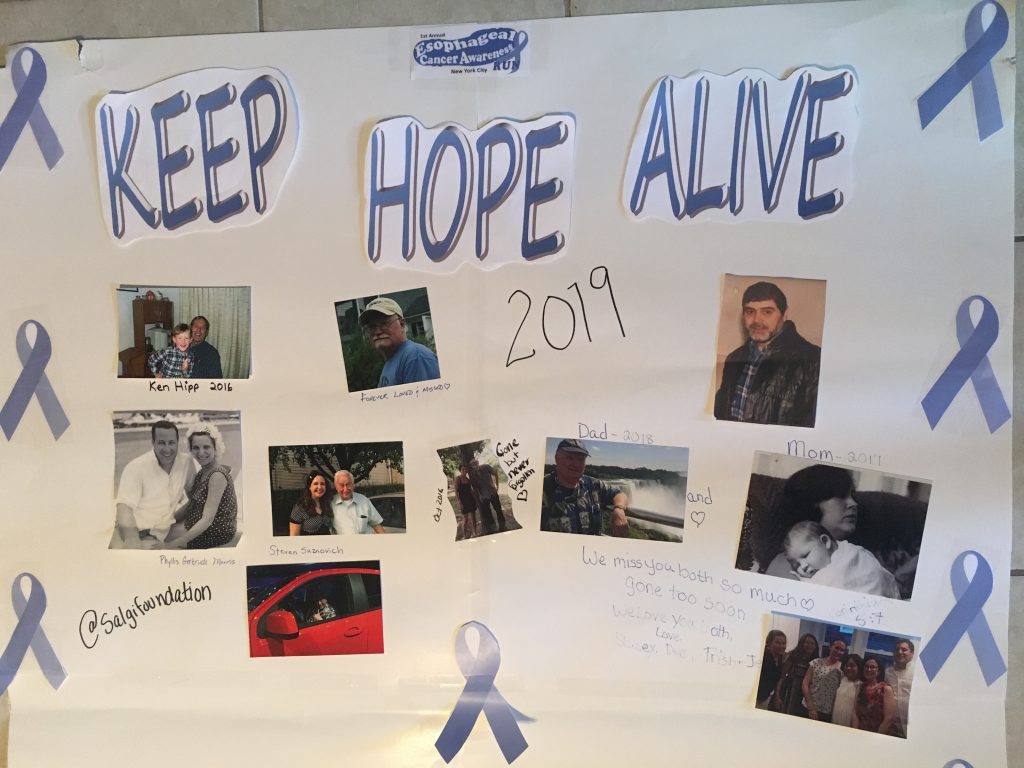 In the years after her father’s death, Dara Mormile started hearing many stories similar to hers. Early screening and treatment efforts for esophageal cancer haven’t advanced all that much, she says, and it’s only by telling stories like hers that people are even aware of the symptoms.

“I tell people what my father went through and it’s educational for them – ‘oh I’ve had heartburn for four, five years, maybe I should get that checked out,’” Mormile said.

In her father’s memory, a photograph of Joseph was prominently displayed on an “in memoriam” wall, his likeness surrounded by periwinkle ribbons (Salgi claims that periwinkle is “the official color of esophageal campus awareness;” several runners wore periwinkle tops). Mormile encouraged the runners to post their own photos of loved ones lost to esophageal cancer on a “Keep Hope Alive” wall, as well as write down who they’re running for.

Among the runners was Mormile’s friend and fellow alum Lauren Keating ‘13, who was there repping the event’s sponsor, vegan fitness supplement company Kramp Krusher. She started running at a time when she was an undergraduate studying journalism at BC.

“I’ve done seven half-marathons and a whole lot of 5K’s like this,” Keating said.

“It’s a lot harder now,” she continued, gesturing towards her protruding stomach — she was eight months pregnant.

First-place runner Leonel Perez handily cleared the five-kilometer run in 18 minutes and 55 seconds. Gounardes and two other runners smiled their way across the finish line a few minutes later.

Of course, the day hadn’t been about winning or losing; it was about coming together to tackle cancer, and in that regard, everyone was a winner.