A place to congregate, a couple boxes of pizzas, envelopes and stamps was all that was needed for a group of New Yorkers to gather together for a common goal: flipping Virginia.

On a Monday evening in late September, a grassroots movement of New Yorkers met at a local ale house to write letters urging residents of the potential swing state to go out and vote.

With the upcoming presidential election and non-stop campaigning, it is easy to overlook local politics; however, elections taking place in November are just as important. Virginia has gathered a lot of attention in today’s electoral landscape. Both parties have an interest in maintaining or gaining the majority and constituents all over are doing their part to support their party.

“Swing Left,” the organization hosting the event, was founded by Joshua Krafchin, Ethan Todras-Whitehill, and Miriam Stone in 2017 in the aftermath of the 2016 presidential election with the purpose of galvanizing people, including those who don’t live in swing states, to come up in support of the Democratic Party.

Katie Fuller, one of Swing Left’s organizers, and resident of Park Slope, said she believes the family-oriented nature of this community will encourage people to join their electoral efforts.

Mary Ellen-Sullivan, a participant at the event, said she hopes her participation will “inspire leaning democrats.” According to the two activists, letter writing has proven to be more effective than postcards and phone banking in reaching potential voters. 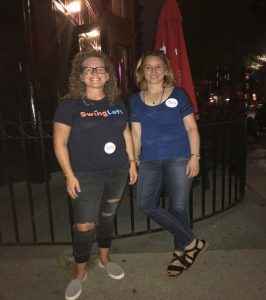 Participants of the event were given a blank letter template to fill out with their own personal answers. The letter began with “I have pledged to vote in every election, because…” Participants filled in the blank in various ways, but they all shared a common idea: voter turnout is important.

Isabel Bryon, another participant said, “It is my civic duty. I can’t complain if I don’t vote.” Bryon shared that she has experience in local grassroots movements as a member of Red 2 Blue, another organization that supports Democratic candidates across all governmental levels, both locally and nationally.

Sitting across from Bryon was Mark Johnson, another participant. The two did not know each other prior to the event but worked on their letters together as if they were longtime friends. Johnson said a conversation he had with a friend inspired him to take part in activism. He said that he was advised to not let the perfect way of doing things stop him from actually doing things.

Events like this are continuously being hosted across the country, for both parties, in this election season.