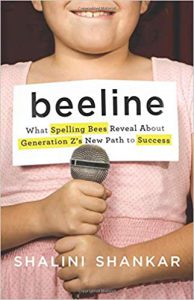 I could’ve been a contender. It was 2006, and I was just one word away from getting a spot in the Scripps National Spelling Bee in Washington, D.C. Alas, it was not to be: my tweenage self balked on “forsythia,” and with a single “ding,” my spelling career was at an end.

But in the past decade, spelling bees have become a barometer for the prospects of Gen Z. So says Shalini Shankar, anthropology professor at Northwestern University and the author of “Beeline: What Spelling Bees Reveal About Gen Z’s New Path to Success.” Shankar has spent the past decade interviewing dozens of spellers and (her term) “Bee Parents,” and placing these Gen Z kids’ hustle in a broader context of ever-evolving notions of childhood.

She discussed her findings this past Friday, Mar. 6 at CUNY’s Asian American/Asian Research Institute. The choice of venue was deliberate: Indian Americans have dominated the Scripps National Spelling Bee every year since 2008, including last year, when seven Indian Americans (and one white girl) won simultaneously. (The media dubbed this precocious bunch the “octochamps.”) Kevin Negandhi, who hosts ESPN’s telecast of the Scripps bee, has called the event the “Indian Super Bowl.”

So why this particular group of kids? Shankar attributes their dominance to the particulars of Indian immigration to the US. During the 1980s, the need for STEM labor grew faster than Gen X could provide it. The 1990 Immigration Act, signed into law by George H.W. Bush, incentivized STEM workers from overseas to work in the US; accordingly, the population of Indians in the U.S. skyrocketed, going from 800,000 in 1990 to almost 5 million by 2020. These STEM workers and their children enjoy some level of socio-economic privilege thanks to their white-collar work, but they lack the generational wealth of their white peers. With a firm belief in the power of education, and without a safety net, Indian American parents in these circumstances often turn to academic competition as a way to ensure their children’s wellbeing.

Why spelling, then? For starters, many Indian immigrants received English-language education; there also exists a “minor league circuit” of smaller spelling bees exclusively for children of Indian descent, microtargeting these communities through advertisements on Hindi- and Tamil-language TV shows. But Shankar singled out 2002, and the release of the documentary “Spellbound,” as the turning point. The film depicted the 1999 victory of Nupur Lala, one of the first Indian-American spelling champs, and put Scripps on the map for many brainy kids – and for many Indian American parents.

“If she can do that,” Shankar explained, “so can my kid.”

For Shankar, whose previous books have tackled Indian American youth culture in Silicon Valley during the dot-com boom, these kids’ ethnicities are doubly relevant due to her research’s secondary aim of diversifying so-called “generational studies.”

“We hear a lot about baby boomers and Generation X and millennials and Gen Z, but very rarely do we hear about how minorities fit into this schema,” Shankar told the audience. Gen Z is the most racially diverse generational cohort yet, but that the majority of the academic literature written about “zoomers” ignores this racial diversity.

Popular literature is even worse in this regard.

“Pretty much the only book not written by middle-class white parents for a middle-class white audience,” Shankar pointed out, was Amy Chua’s “Battle Hymn of the Tiger Mother,” which was roundly condemned in the mainstream media as promoting an overly draconian, almost torturous style of parenting. While Shankar noted that the “tiger mom” stereotype is fairly extreme, she also noted that Chua’s authoritative take on parenting “should come as no surprise to anyone raised by immigrant parents.”

Over the course of her research, Shankar noted that the children she interviewed were surprisingly disciplined, and hungry for the spotlight. Shankar says this is a trend within Gen Z, where childhood has become increasingly professionalized, and children are expected to become experts at increasingly young ages. This is at odds with the white baby boomer perception of childhood as a time of play and innocence, but it makes perfect sense coming from Gen X and millennial parents, whose adulthoods were marked by increasingly competitive job markets – to say nothing of the immigrant parents Shankar profiled, whose entire presence in the US is due to hyper-specialized technical skills.

There is a dark side to this, perhaps: according to the American Psychological Association, 91% of adult “zoomers” say they’ve experienced physical or emotional symptoms brought on by stress. Shankar acknowledged this trend, noting that stress has become a factor for her students over the past decade.

“They see stress as something to be managed at such a young age,” Shankar said of the Gen Z children and teens she profiled. Still, she emphasizes that for the families who welcomed her into her home, spelling isn’t a source of stress so much as it is a source of pride: a way to hone and show off their considerable skills.

As Shankar puts it: “It kind of is an iteration of the American dream.”