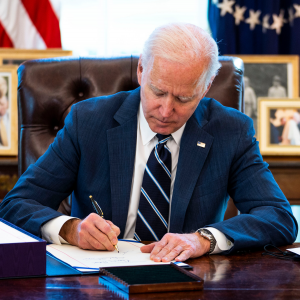 President Biden signs off on a $1.9 billion stimulus, including $1,400 checks for
nearly every American./ Getty Images

First, a toast to all those who have already received their stimulus check – may you spend it however you see fit and however best addresses your economic stresses. The rest of us who are eligible, myself included, should be receiving the check either today or soon after.

Bundled with discussions revolving around the latest stimulus were questions and talk of not only raising the minimum wage to $15 an hour but cancelling student loans – or at least partially. While the former wouldn’t do all that much for people in New York who have already won that fight, raising the minimum wage across the country, whether or not it’s to $15, would be a morally astute undertaking considering the sacrifice of millions across the country. There are serious logistics to consider when increasing the federal minimum wage, logistics I am in favor of hearing out. I am not, however, in favor of listening to anyone who discounts the lived experience of poor people, their pain, and their demands.

This is the unfortunate state of the discourse revolving around minimum wage and putting cash in the hands of working people. Before addressing the pain carried by minimum wage earners, one is beckoned to also consider the businesses who employ them and the country’s economy at large. To this I can only ask to consider the majority first; that’s what democracy is all about after all. It is not about special interests, think tanks, and lobbies having their way dictating what sorts of bills are put on the house floor. Considering a reality where cancelling student debt and raising the minimum wage completely fails and hurls the United States into a death spiral, at least it would be by the people’s doing. I would argue that we are very much in the midst of that spiral; only, the people aren’t at the wheel. Instead, we have forfeited the driver’s seat to people who claim to know what is best.

No one in any field, regardless of their adherence to any political agenda, or their preference for the Yankees or Mets will tell you this country is not in trouble. There will always be silver linings, but we aren’t drawing a playbook here. The only directive is to have a government by the people.

Apologies for my embarrassingly earnest pleas to have our voices represented. But universal health care, raising the minimum wage, and providing student debt relief–not to mention free public colleges–are all popular ideas. Like, very popular. Universal healthcare commands a seventy percent majority by conservative estimates. Raising the minimum wage maintains a healthy two-thirds majority. And a sizable majority of Americans are in favor of some student loan forgiveness. I hopefully need not remind you that elected officials are designed to represent their constituents, no one else. If the people want these things, then so be it. Let’s figure out the headaches as they arrive, but let us first set ourselves down the road of addressing the wants of the people.

Unlike JFK, I have no qualms with asking what my country can do for me. Corporations deciding where to move their headquarters or manufacturing facilities also don’t seem to mind going around asking what governments can offer them in return for the privilege of their company. Us citizens at large, whether we are working in food service or marketing a new product, all contribute to the strength and seemingly endless growth of our economy. There is no need to apologize that your economic output isn’t as large as a CEO and there is no reason not to ask for something in return. No one chooses to be born. But to choose to live, work, and pay taxes should come with an expectation that what you are contributing towards pays dividends towards your wellbeing.

It is on that note that I celebrate most people getting a check from Uncle Sam. We deserve much more than $1400. We deserve to have our medical needs addressed without fear of bankruptcy. We deserve to obtain an education, which is essentially required to participate in higher-earning jobs, at little to no cost. We also deserve to be paid a living wage. That last one should be the least controversial of the three considering we live in the richest country this planet has ever known. You know all their wealth is in liquid assets? You do understand that they provide all the jobs? These are certainly problems that need to be sorted out. But we will only get there if people can reach the consensus that the presiding system is morally distorted. There is no reason why someone should be able to make a billion dollars while people die in the streets. If you can’t arrive at that conclusion then you should find god however you see fit and make peace with him or her in the event that there is an afterlife.