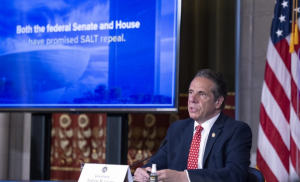 New York Governor Andrew Cuomo goes over the increases to the NYS Budget, including increases to college assistance and other college-related funding./governor.nyc.gov

Increased funding for CUNY was announced in the New York State FY2022 Budget on Apr. 6. The raised budget provides over $7.7 billion in State support of higher education, a 3.8 percent increase in funding from the previous fiscal year. Over $1 billion in new capital funding towards SUNY and CUNY is also included in this year’s budget.

“The CUNY faculty and staff represented by the PSC are delighted to see important gains for CUNY in the budget agreement reached yesterday,” Barbara Bowen, president of the

“Thanks to the State’s strong fiscal management and relentless pursuit to secure the federal support that the pandemic demanded, we not only balanced our budget, we are also making historic investments to reimagine, rebuild and renew New York in the aftermath of the worst health and economic crisis in a century,” said Governor Cuomo in an announcement on the state’s website.

The budget also supports a $500 increase to the maximum TAP award, going from $5,165 to $5,665, as well as a four-year plan to fund the gap between TAP and tuition that’s

covered in SUNY and CUNY tuition credits. It is expected that an estimated $158 million in

TAP tuition credits will be fully covered by the State by the 2024-25 academic year.

In response to the ongoing pandemic, colleges and universities are expected to receive an estimated $5.4 billion in direct Federal stimulus aid, including over $3.4 billion for public

colleges. According to the breakdown of the budget on the state’s website, a considerable amount of this funding will go into providing financial aid grants to students with exceptional needs, including those who receive Pell grants.

It will also increase community college’s formula aid per student by $250 and provide an additional $25 million in State support to over 200,000 of their students in the 2021-2022 academic year.

“We thank the members of the Legislature who responded to the thousands of PSC members, CUNY students and allies who urged New York to break with decades of planned poverty for CUNY,” said Bowen in her statement. “All of us who support a New Deal for CUNY are right to claim these steps as victories.”

“I only had one tuition freeze but she’s responsible for advocating for and bringing almost three years worth of tuition freezes to CUNY students,” he told the Vanguard. “I’m just really proud of USS and their advocacy.”