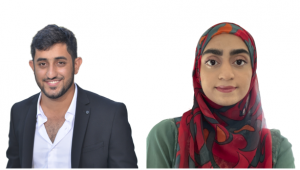 Current USG cabinet members Aharon Grama and Iqura Naheed are the next USG President and Vice President by a margin of 78 votes, defeating David Tawl and Yitzchak Mavashev. As planned, Grama and Naheed will swap positions after the fall semester.

“I’m really excited about it,” Grama told the Vanguard after his victory on Mar. 26. “I think it will be a great year.”

Grama, currently the Chief of Staff to USG President Ethan Milich, plans to continue the work done by Milich’s administration, and move forward.

“For me, it is going to be a new challenge,” he said. Grama and his running mate Naheed will split the job for the most part, working together as a team.

“I feel really grateful for the opportunity,” she said, “I think it’s a really big opportunity and responsibility and I look forward to fulfilling that.”

In an unfortunate continuation of usual trends, only exacerbated by online learning, the voter turnout among undergraduate students was abysmal. Only 376 students voted for USG President this year, accounting for only about 2.5 percent of undergraduate students enrolled at Brooklyn College as of fall of 2020. That is a one percent drop from last year’s election turnout, which took place just weeks after schooling moved online.

“As we all know this past academic year has presented a number of challenges for faculty, staff and students,” said Associate Director of Student Affairs, Hamilton Raymond, who helped oversee the election, in an emailed statement to the Vanguard. “One of the biggest challenges being that students are overwhelmed with Zoom and distance learning/engagement.”

Raymond stated that numerous emails about the elections were sent out, as well as other forms of online engagement.

“Both our student governments and our administrators in student affairs did a diligent job at promoting elections to the Brooklyn College community to ensure voter participation,” he said.

This is not a new problem; student turnout has always been low compared to the size of BC’s student body, making it an obstacle with no real solution.

“One of the theories for such a turnout for elections may be that students saw it as an “extra” thing to do,” said Raymond. “The elections – although the turn out was not what we expected – went on without error and we are proud of that. We are making strides daily to find innovative ways to increase student engagement in a distance learning environment.” Naheed and Grama plan to include student involvement in their platform once their term starts in July. “Definitely throughout our entire term we plan to increase student involvement in USG,” Naheed said.

Maria Jose Urquijo Romero and Chika Otisi were also elected to serve as Brooklyn College’s delegates to the University Student Senate, the body that connects all CUNY campuses. Grama and Naheed will serve as alternates.