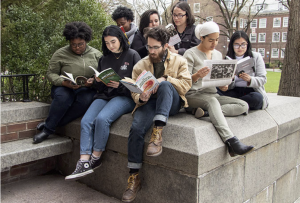 The Undergraduate Student Organization tabled a vote Tuesday, Apr. 27 to recommend to the Reentry Review Board (RRB) designating mask-free areas for vaccinated students in the school’s library and student center.

Joint Resolution 024, proposed by Chief of Staff Aharon Grama, would suggest to the RRB the dedication of certain spaces, such as floors in the library and/or student center, for vaccinated students to study or attend online classes without masks. The proposal would require students to register proof of vaccination on the BC Navigator App and show their registration to security guards outside the specified area.

“I think we all know that not all students can fit into the library, especially if you need to maintain six-foot social distancing,” Grama said, predicting that students would end up lining outside the building to enter in shifts.

With a blended schedule appearing likely for the fall semester, he questioned where students could go to attend remote classes between in-person classes if the library and student center were filled to capacity. According to Grama, designating floors for vaccinated students to gather comfortably would “avoid that cluster of students.”

However, the proposal was met with worries from numerous USG senators. A number of them voiced doubt that vaccinated 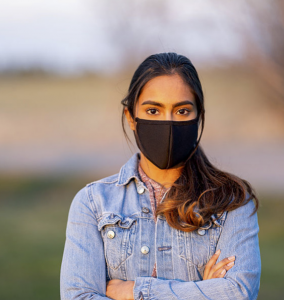 A proper display of masking up./ Henry Ford Health Sytems

people were infallible to infection or spread by touching surfaces.

“Someone who is vaccinated can still spread it by touching surfaces that have been exposed to COVID,” said Senator Emmanuel Valdez. “I think the core issue is the maintenance of these areas.”

“The moment you start dividing where some students can be and where some others cannot be, you are bringing a brand of discrimination against students,” he said. “USG is not here to cause division among students.”

Several senators countered Ibrahim’s argument, noting that it was a student’s choice to be vaccinated or not, while expressing other concerns. When Senator Nick Cevoli, for example, asked how the air from the designated maskless area would be prevented from flowing to other areas, Grama said he presumed that the RRB, which is already examining the school’s ventilation, could plan for such an issue.

Grama also noted that the recommendation could easily be turned down by the RRB, and USG was only voting to bring the suggestion to the Board.

“I think we’re having the wrong discussion,” Valdez said, arguing that it was too early to make assumptions. “I think we’re better off examining the things the college can do, before we take a position on this matter.”

Cevoli made a motion to table the vote on the resolution. All but three senators voted to table the vote, with two abstentions from Ibrahim and Maria Urquijo, and a negative vote from Senator Joseph Hamadani.