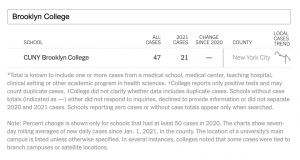 Brooklyn College reported 47 total cases of COVID-19, according to The New York Times, which has been tracking COVID-19 news and data since its emergence last year. The Times has released a comprehensive breakdown of the spread of the virus on college campuses in America which puts into metrics just how much of an impact it’s had on them.

“More than a year after most universities abruptly shifted classes online and sent students home, the virus continues to upend American higher education,” the article reads.

Among the information, which was last updated at the end of April, are numbers showing that CUNY campuses, by and large, reported some of the lowest numbers among all colleges in the state. This is especially notable given the density of the city and how many students attend all of the schools in the CUNY network. The largest urban university system in the country, and the fourth largest overall, CUNY reportedly had over 270,000 students across its 25 campuses and 26 schools in the fall of 2019, just before the pandemic. However, there is no way of knowing how many students and faculty contracted the vaccine, since the majority of cases go unreported.

Despite this large concentration of students, and a sizable staff to complement it, CUNY recorded only 738 positive COVID cases across 20 campuses, per the New York Times tracking data. The greatest concentration of positive cases among CUNY schools comes from Hunter College, which has had 100 positive cases to date and is the only CUNY school to have positive cases in triple digits. The rest of the CUNY schools’ numbers largely range in the dozens, with the CUNY School of Law, on the other end of that spectrum, reporting only two cases.

The Macaulay Honors College, School of Medicine (housed on the City College campus in Harlem), Graduate School of Journalism, School of Professional Studies, School of Public Health, and the School of Labor and Urban Studies were all among the CUNY colleges that didn’t report any positive COVID cases. These schools also have some of the lowest enrollment numbers in CUNY, and are largely post-grad colleges, which played a part.

Brooklyn College, which boasted an enrollment number of over 17,000 students last fall, and is one of the largest senior colleges in the CUNY network, reported only 47 total cases, with 21 of them occurring this year.

These shockingly low numbers are likely due in large part to the rapid and appropriate response of the schools to stem the transmission of the virus in the early days of the pandemic. On Mar. 12 of last year, all CUNY schools took an academic recess and suspended in-person learning for a week, before picking back up on the 19th employing distance-learning. For the rest of the spring semester, and till present time, the schools have benefitted from a mixed model of learning, with most teaching being done online. While a rare few classes have returned to some form of in-person teaching, no CUNY school has fully reopened, which means that there have been far fewer chances for the virus to spread among the populace.

According to the Times data, countless notable New York City schools, like Columbia and Fordham, individually reported more numbers than the whole of CUNY. SUNY, the largest university network in the country and CUNY’s neighbor, has had tens of thousands of positive cases according to the New York Times. This is likely due to returns to campus both last fall and this spring, which prompted new waves of spread to occur.

With vaccinations being made steadily more available, and a lot of schools eyeing a real reopening in the fall of 2020, it will likely serve as reassurance to folks in the city to see how low the number of reported cases were in the CUNY network. New York leadership also seems keen on keeping the numbers down, with Governor Andrew Cuomo announcing on Monday, May 10 that CUNY will require all students returning to campus to be vaccinated against COVID-19. It seems like CUNY is on track for a relatively safe reopening this fall, and played it smart by keeping school mostly online until now.

Moises Taveras is the Features Editor at the Vanguard. When he's not doing that, he's playing video games or spending far too much time on Twitter.
View all posts by Moises Taveras →
← Newer Post
Cuomo Announces All of CUNY Must Get Vax to Return to Campus
Older Post →
Outgoing USG Prez Ethan Milich Looks Back on Time at Student Gov