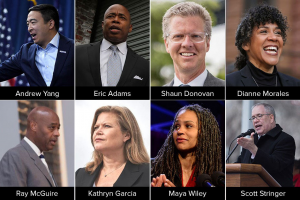 As the Big Apple’s mayoral race heads into the primaries, the list of running candidates has narrowed, with three garnering the most attention by surveyed New Yorkers: businessman Andrew Yang, Brooklyn Borough President Eric Adams, and City Comptroller Scott Stringer. As the race remains anyone’s game, and polls show many voters are still undecided, some Brooklyn College students have a general sense of who’s cut out to govern the city.

“There’s no other city like New York. So it takes a certain type of person to run New York,” said BC senior Brittany Thevenot, who will be voting to elect a new mayor for the first time on June 22 in the primary election.

Beginning on Thursday, May 14, the 15 remaining candidates will go head-to-head in televised debates. Against the backdrop of New York City’s recovering economy, COVID restrictions rolling back, crimes and shooting incidents increasing, along with other issues, candidates have been tasked with highlighting how they would reshape the state of the city once elected. Aside from addressing these challenges, the primaries will be the first mayoral election to have ranked-choice voting for voters, who can select up to 5 candidates of their preference for their party’s mayoral nominee.

For many BC students, their vote would side with the candidate capable of getting the city to safely, and steadily, enter a post-pandemic reality as Mayor Bill De Blasio’s successor.

“I think they should be believing in science,” Thevenot said, who also believes that the newly elected mayor should work towards defunding the NYPD. “There’s been other mayors and governors who haven’t been following science and continue opening back up and not following any guidelines.”

Though de Blasio has stated that NYC is expected to be “fully reopened” by July 1, some students opined that it is essential for the incoming mayor to maintain some COVID guidelines before New York is out of COVID’s murky waters. “Mask wearing, social distancing, and vaccinations are factors that should be accounted for by the new mayor,” said BC sophomore Mia Galeano.

“I hope those kinds of things can be enforced or at least suggested to the public,” Galeano said. City-wide, the count of coronavirus contractions is over 900,000, but is on a downwards trend, as reported by the New York Times. Besides taming the virus, some BC students also stated that the incoming mayor should represent the people’s diversity.

“I think someone representing that population will probably be an ideal candidate for New York City,” said a BC student who wanted to remain anonymous. They noted that this year’s running contenders are “more progressive, younger, and representative of who we are as New Yorkers.” Though they are not currently following the race extensively, the student is interested in voting for Dianne Morales, a first-generation Democratic candidate and founder of social services nonprofits.

“The fact that she is a woman too, I think that’s awesome. More diversity,” the student said. Similarly, for Thevenot, who is considering placing Morales at the top of her ballot during the primaries, desegregating and increasing funding for public schools across NYC is a challenge that she believes the candidate can take on. But most of all, Morales is relatable, something that her political opponent Maya Wiley is not, according to Thevenot.

“I felt like she wasn’t relatable enough, but she has good credentials,” Thevenot said of Wiley, who she first heard of at last semester’s Shirley Chisholm Day virtual celebration at BC. “I just heard her speak, and it felt like when politicians give their spiel.” Nonetheless, with Wiley building part of this mayoral race’s diverse racial and gender makeup, some students think that it is worth marking down this year’s election in NYC’s history.

“More people of color are running – that’s awesome,” the anonymous BC student said.

Though Democratic candidates Yang, Adams, and Stringer, who is facing sexual misconduct allegations, are largely recognized by the majority of likely voters, about half of New Yorkers haven’t picked a candidate yet, according to a recent Pulse Of The Primary report. According to a poll by Slingshot Strategies, 42 percent of Democratic voters will likely rank Yang in their top three ballot slots. 37 percent will probably place Stringer in their top three, and 34 will have Adams in their top three, local non-profit paper THE CITY reports.

As the primaries draw near, some BC students think that more should be done to inform the New York City public of the mayoral race’s candidates. Whether it be in the classroom or through ads on social media, more about the contenders and their whereabouts should be widely accessible, some said.

“As unfortunate as it is, I don’t think there’s enough attention placed on the mayoral race as much as presidential,” said Galeano, who does not know which contender will get her vote. “I just want to search up the different candidates and then see how they meet my values, how I envision and want to see the city to look like in a year.”