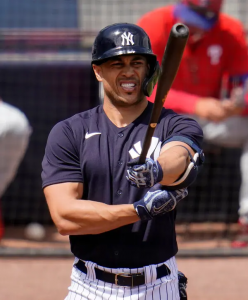 The driving force of the Yankees, Giancarlo Stanton./ NYT

The New York Yankees’ slow start put their fans into a downward spiral of sadness and anger. The Yankees went an abysmal 12-14 in April, playing a lousy brand of uninspired baseball. Hopes of reaching the World Series started to fade quickly, but after a solid couple weeks, hopes are back on the rise.

So far in May, the Yankees are off to a hot start, going 6-2 in their last eight games. They have also won all three series they have played, including a sweep of the Detroit Tigers and 2-1 victories over the Houston Astros and the Washington Nationals.

The Yankees slowly got hot in mid-April after suffering a sweep at home from the rival Tampa Bay Rays. Since then, they have yet to lose a series, beating the Cleveland Indians and then splitting the series’ with the Atlanta Braves and Baltimore Orioles.

Surprisingly, pitching has been the biggest constant for this season, while the bats have struggled, leading to that slow start. The Yankees posted an MLB fifth-ranked ERA and batting average against, along with the third-most strikeouts in baseball. Many of these numbers are due to how good the Yankees’ bullpen has been. The bullpen has an ERA of 2.79 and a batting average against of .193, ranking third in the MLB.

Aroldis Chapman has been one of the biggest names in baseball as a closer and has raised his  game to a whole different level with his new split-finger fastball. Chapman was always deadly with a fastball that hit 100MPH with ease and a slider that stayed around 90MPH. Now his splitter drops out in front of batters. With this, Chapman only allowed eight base runners in 13 innings, along with 29 strikeouts.

The starting pitching rotation falls into line behind Gerrit Cole, who looks to be an early Cy Young Award candidate. Corey Kluber, Jameson Taillon, and Domingo German all didn’t pitch at all last year, so it made sense that they would have a rocky start. However, all three of them have started to settle in, all under a 5.00 ERA, other than Taillon, sitting at 5.02.

However, the biggest story of this season has been the Yankee bats. The idea going into the season was that the starters, other than Cole, could give up three runs because the Yankees’ star-studded lineup will likely put up five runs for the win. That has not really happened, and in fact, the opposite has happened. The Yankees rank 21st in runs and 22nd in RBIs, and rank 25th in batting average.

Now, the Yankee bats are starting to figure that out, and no one has been more impressive than Giancarlo Stanton. Right now, his batting average for the season is .292, but in the last 15 games, it is .413, with 6 HRs and 12 RBIs. These last few games have shot up his production, and he has turned around his season in a heartbeat.

In May, the Yankees had four batters hitting over .300, while in April, they only had three guys over .270. Even though this is a small sample size, it does show that the bats are starting to heat up. On top of that, last year’s HR leader Luke Voit is set to make his return from his injury in the upcoming Tampa Bay series. Right now, Voit is in AAA, batting .389 with three HRs in just 18 at-bats.

With the Yankees bullpen looking to stay hot, if the starting pitching keeps improving, and the bats finally start to figure it out, it seems like Yankee fans once again can hold on to hope as they push for a World Series run.