Outside Brooklyn College’s Bedford Gates on Monday, Sept. 12, students of Puerto Rican Alliance (PRA) rallied against the ongoing tenure understaffing issues in the Puerto Rican and Latino Studies (PRLS) department. PRA called out administrators for neglecting PRLS’ needs and the history it represents, demanding that Brooklyn College and CUNY allow PRLS to hire an additional professor who can be on track for tenure.

“We have seen time and time again, for over a decade, that it will not be the institution that supports us,” Valeria Pinet-Sanchez, PRA’s secretary, said during the rally. “But our educators in this department [PRLS] understand and have been through the struggle before. It is our peers and campus community spaces who will show up for us as we see today.”

Tenure enables professors to conduct research, have a role in department governance, mentor students, and allow them to vocalize their critiques against administrators, among other benefits. On Monday, PRA demanded the college convert its recent lecturer offer for PRLS to a tenure track professor offer, in light of the department only having one tenured professor and three on track to receiving it. Unlike a tenure track position, the lecturer offer means a professor would be mainly responsible for teaching.

“We’re tired having to come here, right into the streets, and to act as social movements in order get our very own basic need,” Alan Aja, the department’s chair and only tenured professor, said during the rally.

At CUNY, a department needs a minimum of five tenured or tenure track professors to decide on governance that affects them.

In total, PRLS has five full time professors, including a substitute who’s position is determined semester-to-semester and who cannot decide in department governance whatsoever. These tenured and tenured track understaffing issues in PRLS have continued at Brooklyn College for about a decade, according to rally organizers.

“This decision is only the most recent in the history of many, many where we have been chronically underserved, underfunded, and undermined,” Christopher Arias, PRA’s president, said at the rally. “Why is it that our quality of education is compromisable?”

Over 120 professors across the college signed a letter in April 2022 to Brooklyn College’s President Michelle Anderson and Provost Anne Lopes after this fall was projected to leave tenured Aja and one other professor on the tenure track. The letter’s writers, Professors Joseph Entin and Jeanne Theoharris, demanded Brooklyn College allow PRLS two tenure track professors and a senior hire, who’s track to tenure could be sped up. Though the college granted the two tenure track hires, they did not allow PRLS a senior hire, but instead offered them a lecturer in August.

“Brooklyn College supports the Puerto Rican and Latino Studies Department (PRLS) and recognizes its importance to students and the surrounding community,” Richard Pietras, BC’s Media Relations Manager, wrote in a statement to the Vanguard. “To help ensure its growth and success, the college went through a rigorous process—which included the department—to determine academic instructional needs. This resulted in the hiring of two more tenure track faculty members last year and the approval for a fulltime lecturer this year. Currently, PRLS has five fulltime faculty in the department and has the ability to have six fulltime faculty this year.”

Though the lecturer offer could bring the department’s total professor count to six, PRLS would remain one short from CUNY’s departmental minimum of five tenured and tenure track professors to decide governance issues independently.

“The administration has filled in holes over the years with substitute instructors here and there, but that’s not the consistency that students need,” Aja told the Vanguard. “So we’re here to demand a senior hire – a tenured professor – to bring the department to five [tenured and tenure track professors].”

If its lecturer offer converts to a tenure track hire, the PRLS department intends to hire a professor with an Afro-Latinx background, who would provide research related to their identity and help represent the student body that makes up Brooklyn College.

“What it really comes down to is that this is going to affect the quality of education that we have at Brooklyn College,” PRA President Arias told the Vanguard. “We have a great department of people that really care, that are resilient in all these challenges, but there’s no need to be challenging them to begin with and in turn, making life harder for students.”

PRA’s rally was supported by Councilwoman Alexa Avilés, several BC departments such as sociology, anthropology, and history, and different student organizations including Women of Color and Dominican Student Movement. Activists and retired professors who previously fought for similar causes in support of PRLS were also in attendance.

“I see that these students here are definitely empowered,” Dr. Milga Morales, a co-founder of PRA, told the Vanguard. “They have taken advantage of what the college has offered, which are the department of Puerto Rican and Latino Studies and other departments as well, that in fact talk about our histories, our cultures, and the issues of concerns for those of us that are interested in what’s going on in our communities. So I feel that this is a good reflection of our campus, and what can be, and we can make this more stronger.”

During the late 1960s, PRA and African American student activists aimed to create institutes where they could study their cultures and histories. By 1970, their collective efforts helped to form the PRLS department. Today, several of those students and others from different campuses continue their activism through the Alliance for Puerto Rican Education and Empowerment (APREE).

“Hopefully everybody will be reminded that we are here,” said Morales, who is a member of APREE. “We’re going to be here until we can actually make the department whole. And hopefully that’s the message that was put forward today and that will be carried forward.”

Rally participants also called out CUNY Chancellor Félix Matos Rodríguez for not properly funding PRLS and other ethnic studies, and criticized his latest feature in the New York Times where he discussed how he spends his Sundays. Matos Rodríguez, who is of Puerto Rican descent, is the first Latino to lead the university and holds a degree in Latin Studies.

At Brooklyn College, there are 26 Latinx professors and eight of them are full-time, according to Professor Carolina Bank Muñoz, Brooklyn College’s union chapter chair that represents faculty and staff. Over the past two and a half years, 10 professors of color have left the college.

“Ya basta. Today, we stand with PRLS as a campus community and we demand that Michelle Anderson, president of Brooklyn College, and Félix Matos Rodríguez, the first Latino chancellor at CUNY, to do the right thing and fully staff PRLS with a senior tenured track line,” Bank Muñoz said. 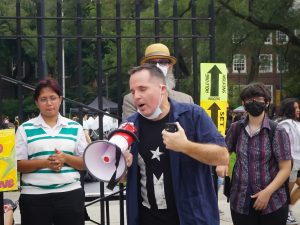